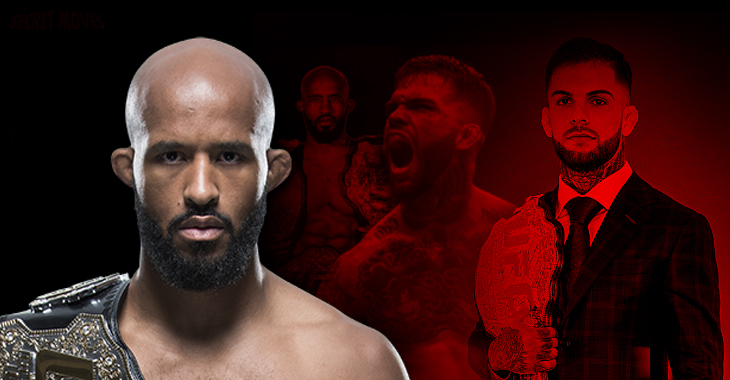 Cody Garbrandt is about to squash one of the biggest rivalries in MMA with the violence that awaits us at UFC 217. He’ll be defending his title against TJ Dillashaw, who needs no introduction. Potentially stacking back-to-back wins over long-time bantamweight king Dominick Cruz and former champion Dillashaw, would be a huge feather in the hat of Garbrandt. However, the current belt holder doesn’t want to just stop there, he wants to fight Demetrious Johnson next to become a two-division champion. He’s talked about it before, but he doubled-down on this ‘business move’ today on the UFC 217 conference call.

“With a knockout over TJ [Dillashaw] I’ve wiped out the division. There’s a big gap between myself, then it goes [Dominick Cruz], and then TJ, and then it falls off from there so TJ is my next adversary, my next challenge. I know what he brings to the table. I’m focused and prepared on that, to wipe him out and then go on from there. I always like to have a fight ahead of myself, you know, plan ahead, and obviously I’m focused on TJ, but Mighty Mouse is next at 125 pounds. I can make 125 on November 4th if I wanted to.”

“I gave Dominick a rematch. TJ should be thanking Dominick Cruz right now for letting him take the fight, give him the fight. I whooped Dominick’s ass so bad that he didn’t want a rematch. He wanted me and TJ to go in and do it. Dominick’s at the tail end of their career. I could care less what Dominick does in the [Jimmie] Rivera fight. Neither of those guys are money fights for me anyway. So, first and foremost, focus on TJ. This is a gimmie fight too, this is a fight for me that — I’m going to end this dude and go on and I can pick my fights from after that. I’m going to do down and fight Mighty Mouse at 125 and that’s just a business. I like the guy a lot, but that’s just a business move for me.” — Cody Garbrandt on the UFC 217 conference call.

Now that Demetrious Johnson has beat Anderson Silva’s title defense record, fans and media alike are pondering what could be next. He’s gone on to say that he eyes a bonkers 15-title defenses before his career is up, but never ruled out superfights if the money was right. It was a fight with TJ Dillashaw that Johnson infamously got into a dispute with the UFC about before the record-breaking fight with Ray Borg, but now that he’s accomplished it and Cody Garbrandt has agreed to drop down in weight, it’ll be interesting to see what Johnson thinks. First, he has to beat Dillashaw at UFC 217.