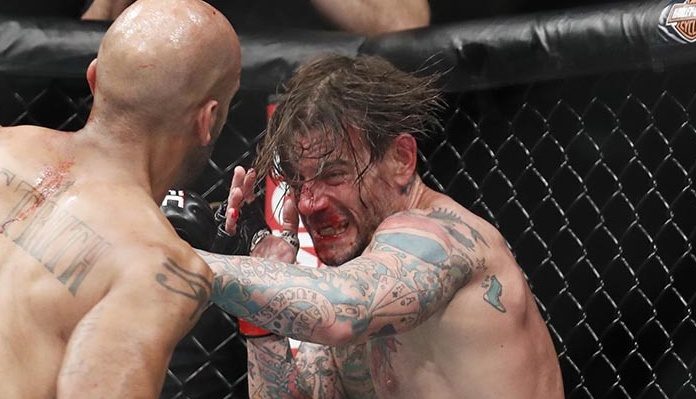 CM Punk was beaten, battered and bloodied in front of his hometown crowd at UFC 225, but he was never broken.

For 15 minutes, MMA fans got a glimpse into the world of a man choosing to live life by his own script. Every ink blot and pen stroke led the former WWE champion back to the UFC after being submitted in the first round of his debut nearly two years ago.

His decision to do so had many believing he wasn’t so much straight-edge as he was over-the-edge. The hallowed UFC Octagon, an eight-sided structure that houses some of the baddest athletes on the planet, never seemed like it could be a home for a former professional wrestler with no martial arts background.

And yet, Punk stood in the center of the cage, after getting outstruck by UFC welterweight Mike Jackson, a winner that never needed his hand raised.

His decision to trade in the wrestling boots for a pair of four-ounce MMA gloves was never about being the best fighter in the world. Those odds were always going to be insurmountable for a 39-year-old fighter playing catch-up with lifelong veterans.

Fighting was more about testing himself, spreading his wings and being the best version of himself as humanly possible—basically, the core reasons for why martial arts exist in the first place.

There was a moment on Saturday night that transcended the spiteful talk that has lingered ever since his MMA career sprung to life.

Jackson, a former Golden Gloves boxing champion, cracked him clean on the chin early in the second round with a right hand that would have finished most human beings. But Punk merely stumbled backward a few steps before resetting his feet and unloading a flurry of wild punches in return. There was no backing down or giving up. His body was basically a meat suit auto-piloted by a heart that refused to relent.

That lone moment gave the MMA world a peek inside the soul of Phil Brooks, the man behind the CM Punk caricature and revealed a fighter that genuinely wanted to be inside that cage. More importantly, it revealed the heart of a man deserving of respect.

You win some, you lose some! I'm 1-1 this week and I'll take it! Thanks to my team, my family, my friends, and THE FANS! Wouldn't be here without any of you. Respect to @TheTruthJackson, thanks for the fight! You only live once, and… I'M ALIVE! pic.twitter.com/UPPGFpx4iS

Punk has spent the last three years getting beat up and thrown around by some of the best fighters in the world at Roufusport all in preparation for competing in the UFC.

He never came into the sport with the takedowns of a former NCAA Division I wrestling champion like Brock Lesnar, and he never had the striking pedigree of a multiple boxing world champion like Holly Holm. Youth isn’t on his side, either, and he is contending with the wear and tear from 15 years of professional wrestling.

There was every excuse in the world for him to hit the emergency eject button on his crazy idea to start an MMA career in the UFC.

Roufusport might be the only MMA gym in the world where you can go and see a former WWE champion cleaning mats. Punk has been humble in every aspect of his MMA journey, and it certainly wasn’t his fault his WWE fame brought him a UFC opportunity.

Even when fans rejected the idea of him competing in the promotion, he continued to grind away for long hours in the gym hopeful of the day he’d earn their respect. That day came the moment he stepped into the cage to fight Mickey Gall and lingered profoundly after his fight with Jackson.

Win, lose, or draw, I’m really happy for CM Punk. Not many men would sack up to put their nuts on the line in front of millions of ppl. That’s a win in itself, whether or not he belongs in the UFC at this very moment. #UFC225

@CMPunk has heart! He isn’t quitting on himself!

I’ll tell you this @CMPunk has more balls then 99 percent of people on this earth. Much love to my brother.

Aww I was routing for CMP.. say what you want he’s got heart #UFC225

No give up in @CMPunk . I respect him doing the work in the gym and putting himself out there for so many to judge. #ufc225

Punk might very well have fought his last fight in the UFC. During the post-fight press conference, UFC President Dana White slapped down the idea of a third bout.

“No, it should be a wrap. The guy’s 39 years old. We gave him two shots, and he had a lot of heart tonight, and I think he should call it a wrap.,” White said, per MMAjunkie.com.

Whether Punk decides to hang up his gloves next to his wrestling boots remains to be seen, but if this is the end, he can be proud of the fact that he went out on his shield an entertainer in a sport few have the fortitude to compete in.

As former United States President Theodore Roosevelt once said, “The credit belongs to the man who is actually in the arena, whose face is marred with dust and sweat and blood.”

UFC 225 will be remembered for many things.

It was the night Robert Whitaker and Yoel Romero put on a fight of the year performance; the night Colby Covington won interim gold and proved himself to be one of the best welterweights on the planet; the night Holly Holm reinserted herself back into the title picture; and the night Tai Tuivasa defeated a heavyweight legend.

For Punk, the most famous and least experienced fighter on the card, it was the night he went the distance and found acceptance along the way.