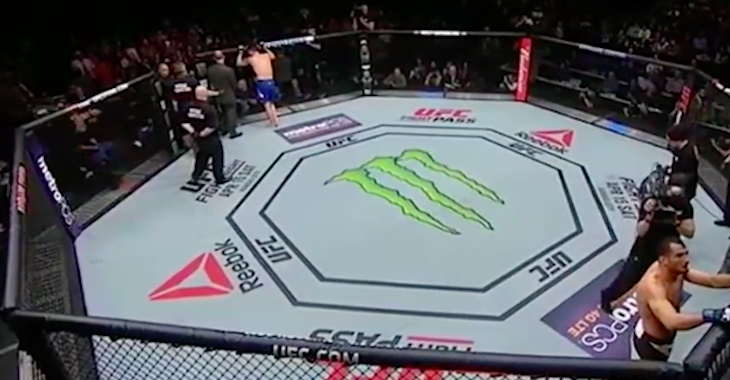 Recently, at UFC 210, former UFC middleweight champion Chris Weidman stepped into the Octagon with Gegard Mousasi in hopes of snapping a 2-fight skid and returning to the win column. After going undefeated throughout his professional career, which included winning the UFC middleweight title, Weidman dropped back to back losses to Luke Rockhold and Yoel Romero.

While Weidman hoped to return to title contention with a win over Mousasi, it was Mousasi who walked away with the win, picking up a TKO win after Weidman was declared TKOd by referee Dan Miragliotta in what turned out to be an extremely controversial incident.

Now, veteran referee ‘Big’ John McCarthy has given his expert opinion on the situation to MMAJunkie, saying:

“What everybody’s not looking at is, they all look and say, ‘Oh, that’s unfair to Chris Weidman,’” McCarthy told MMAjunkie Radio. “In a way, it kind of is to a point. But no, it’s unfair to Gegard Mousasi. Mousasi is the guy that got screwed over, except for the ending. Because Mousasi does things that are all legal for him to do, and he hurts – we’ll say – Chris, because Chris is going to say, ‘I’m hurt.’

“And if you’re going to say, ‘I’m hurt,’ I’m going to say, ‘OK, you’re hurt.’ He did it legally. And now they’re taking him away from you to hurt you more, and giving you time to recover from something that was legal. That’s bad. That’s the bad part.”

He continued, discussing the new rule, which changes the definition of a ‘grounded fighter’: “In that situation, we want (to say), ‘Chris Weidman, put your knee to the ground. Use your hands to defend yourself. That’s what they’re there for.’”

“The rule has been working beautifully everywhere. It’s hard for athletic commission people to understand, because how many fights do they do? But I do fights every week, multiple times a week, everywhere. And it’s been freaking awesome. We’ve gotten guys to get away from doing this stupid thing of putting one hand down and thinking they’re safe. It’s changed what they’re doing.”