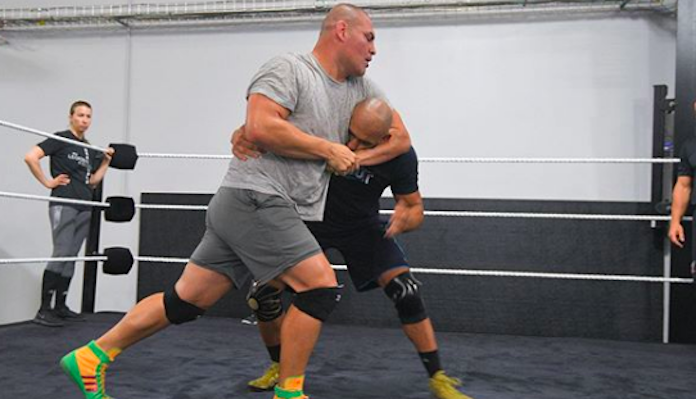 Velasquez shared some shots from his efforts at the WWE facility on Instagram.

“I had a great time over the last couple days getting a few workouts in at the @wweperformctr and attending @wwenxt,” he said in the caption that accompanied these photos. “Thanks to everyone at @wwe for the Invite and first-class treatment. #LuchaLibre.”

Unsurprisingly, some fans took this to mean that Velasquez could be changing careers and transitioning to the word of pro wrestling. That said, it’s worth noting that Velasquez specifies that he was just “getting a few workouts in,” which doesn’t seem to imply anything long-term.

“My experience here has been amazing,” Velasquez told WWE.com of his time at the WWE Performance Center (transcribed by Jesse Holland for MMAMania). “I’m just looking forward to being here and learning as much as I can. I’ve been a fan of the sport since I was a little kid, and now I get to participate in it.”

While it’s unlikely that Cain Velasquez is transitioning into pro wrestling, he certainly wouldn’t be the first MMA fighter to do so. There is a long history of MMA fighters moving to pro wrestling, and vice versa, the most recent example being Ronda Rousey.

Cain Velasquez has not fought since UFC 200, in July of 2016. On that night, he picked up a first-round TKO of Travis Browne. His next most recent fight occurred in June of 2015, when he was submitted by Fabricio, while his next most recent fight beyond that occurred in October of 2013 when he TKO’d Junior dos Santos. Though he was once the most fearsome heavyweight on the planet, these long layoffs and the injuries that caused them have cast a shadow over the recent years of his career, and shrouded his future in uncertainty.

What do you think the future holds for Cain Velasquez?