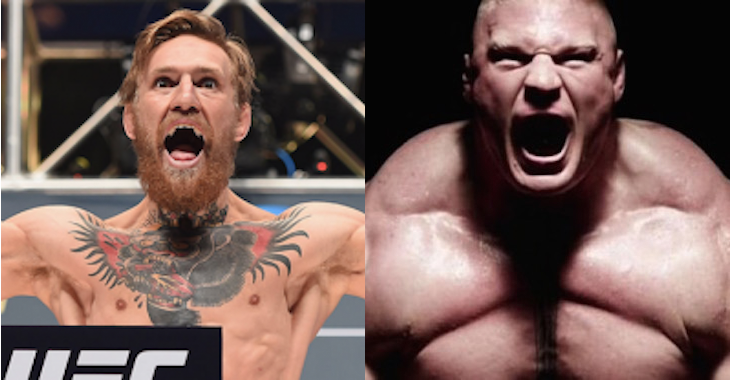 According to most reports, Brock Lesnar is still the king of UFC pay-per-view. Most reports indicate that UFC 100, which was headlined by Brock Lesnar vs. Frank Mir in their rematch, came in at 1.6 million buys.

However, Conor McGregor claims to hold the records for PPV, Gate, TV, Fightpass, Embedded record, as well as the fastest KO in UFC title fight history.

Now that Lesnar is returning to the Octagon for a bout with Mark Hunt at UFC 200, he isn’t back to make any claims to shine brighter than “The Notorious.”

“I’ve got no qualms with anybody,” Lesnar said on “SportsCenter” recently (transcribed by MMA Junkie). “If somebody wants to state they are the biggest pay-per-view draw in the world, I don’t care. I’ve never came out and said, ‘Hey, listen, I hold the most pay-per-view buys.’ All I know is what I got paid, and I’m happy to do so. I’m a prizefighter. I don’t hang my championships on the wall because they don’t pay the bills.”

Lesnar says he does not know Conor McGregor on a personal level and says that fighters are starting to realize it isn’t just about fighting in the Octagon.

“I don’t know him, but I know of Conor McGregor,” Lesnar said. “This sport has evolved even from the first time that I entered into the octagon. I think people are finding out that you have to talk the talk, and more importantly you have to walk the walk. For guys that can talk and walk the walk, I think it’s great. It’s great for the company.”

Will Lesnar be able to talk the talk and walk the walk when he steps up to Mark Hunt at UFC 200? Share your prediction for their fight in the comment section!