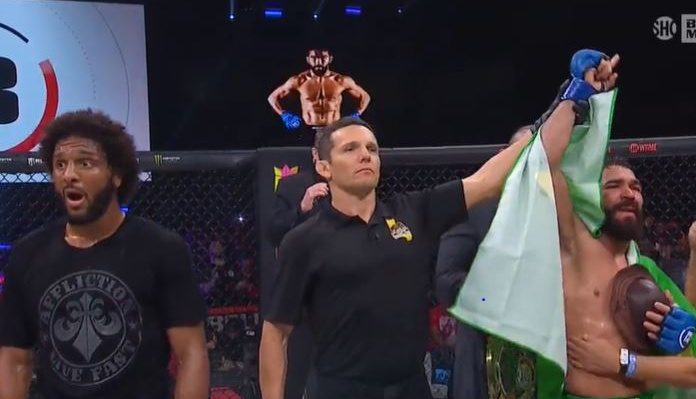 McKee (18-1 MMA, 18-1 BMMA) was looking to earn his first career title defense when he squared off with ‘Pitbull’ for a second time this evening. ‘The Mercenary’ had won 5 of his previous 7 bouts in the very first round ahead of tonight’s affair.

Meanwhile, Patricio Freire (33-5 MMA, 21-5 BMMA) had entered tonight’s Bellator 277 event looking to keep his perfect rematch record in check. The Brazilian had gone 5-0 in his previous rematches, a streak which included wins over Daniel Straus, Pat Curran and Emmanuel Sanchez.

Tonight’s featherweight title fight went the full twenty-five minutes in a tightly contested affair. Both men were able to land a plethora of different kicks, this while getting off some good punches and combinations. After five rounds of back and forth action, ‘Pitbull’ was awarded the unanimous decision victory.

Check out how the pros reacted to ‘McKee vs. Pitbull 2’ below:

I either hate the hat or I love it. Undecided.

Who would you like to see Patricio Freire fight next following his decision victory over A.J. McKee at tonight’s Bellator 277 event? Is an immediate rematch in order?