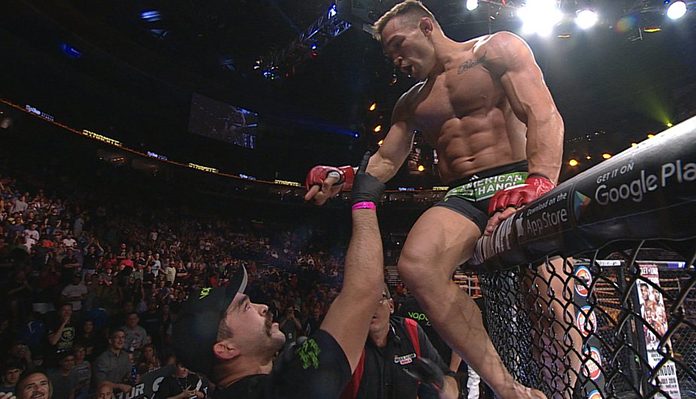 Pitbull KOed Chandler in Bellator last June to become a rare double champion in the promotion. As for Chandler, after KOing Sidney Outlaw and Benson Henderson in devastating fashion, he signed a free-agent contract with the UFC. The UFC is so high on Chandler that it has tabbed him as the official backup for UFC 254’s main event between UFC lightweight champion Khabib Nurmagomedov and interim champ Justin Gaethje.

On Saturday, Chandler took a shot at Patricio Pitbull’s brother Patricky, who Chandler KOed in devastating fashion at Bellator 157 in 2016. Pitbull was not happy with Chandler posting the clip of him brutally knocking his brother out, and in turn, Pitbull took to his own Instagram to post a video of him KOing Chandler, mocking his message in the process.

The choice is yours… – Your spot at the table is never owned…it’s always rented and the landlord is there every single day with his hand out. – Rent is due EVERY SINGLE DAY. – If you aren’t there to make the deposit, you lose your seat at the table and get passed up by those willing to relentlessly put in the work while you talk about it. – Eventually hard work pays off, you just have to still be standing there here when it does. – See you at the top! You’ll always be my b*tch @mikechandlermma

Clearly, there is no love lost between Pitbull and Chandler. Even though both men are fighting for rival organizations now, there still remains bad blood here and there probably always will be. Unfortunately, we likely won’t see the rematch between these two anytime soon since one is in the UFC and the other is in Bellator. But you never know what the future may hold, and perhaps one day Pitbull will get his wish of a cross-promotion fight.

Do you think we will ever see the rematch between Patricio Pitbull and Michael Chandler?