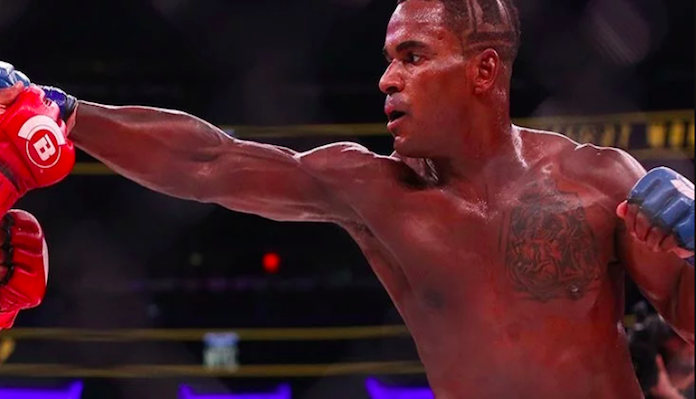 Former UFC welterweight Lorenz Larkin will move up to middleweight when he takes on Costello Van Steenis at Bellator 258 next month.

Many fans have been wondering what Larkin has been up to. When Bellator released its inaugural promotional rankings last week, Larkin was nowhere to be found in the 170lbs rankings because he had a 15-month layoff. Still, it made fans wonder where “Da Monsoon” was. Now we know, as the striker just had next his MMA fight announced.

According to ESPN’s Marc Raimondi, Larkin will return to the cage on May 8 when he takes on Van Steenis at Bellator 258. That card also features a bantamweight title main event between Bellator bantamweight champion Juan Archuleta and No. 1 contender Sergio Pettis. Additionally, there is an incredible light-heavyweight World Grand Prix semifinal bout between Yoel Romero and Anthony Johnson that is set for the card. Overall, it looks to be one of the best Bellator cards of the year, and Larkin vs. Van Steenis is a great matchup.

Lorenz Larkin will return against Costello Van Steenis in a middleweight bout at Bellator 258 on May 7, promotion officials told ESPN. Larkin has won four in a row, but has not fought since December 2019. Van Steenis, a protégé of Gegard Mousasi, has… https://t.co/tRn7oWoBro

Lorenz Larkin will return against Costello Van Steenis in a middleweight bout at Bellator 258 on May 7, promotion officials told ESPN. Larkin has won four in a row, but has not fought since December 2019. Van Steenis, a protégé of Gegard Mousasi, has won seven of eight. Bellator 258 is headlined by a bantamweight title fight between champion Juan Archuleta and Sergio Pettis, plus a Bellator Light Heavyweight World Grand Prix first-round matchup between Yoel Romero and Anthony “Rumble” Johnson.

Larkin (22-7, 1 NC) is currently riding a four-fight win streak in Bellator, including a win over former Bellator welterweight champion Andrey Koreshkov. Since joining the Bellator roster in 2017, Larkin has gone 4-2 overall in the promotion, with his only losses to Paul Daley and Douglas Lima. Before joining Bellator, Larkin was a top-ranked welterweight in the UFC, with notable wins over Jorge Masvidal, Neil Magny, and Santiago Ponzinibbio.

Who do you think wins this Bellator matchup between Lorenz Larkin and Costello Van Steenis?