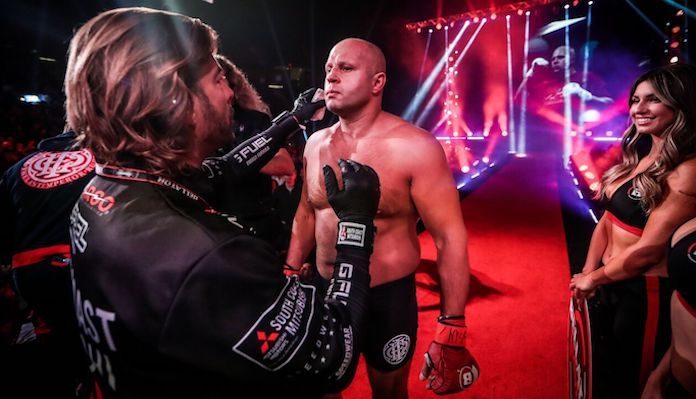 On December 29, Bellator MMA will make its debut in Japan. One of the highlights of this event will be a showdown between MMA legends Quinton “Rampage” Jackson and Fedor Emelianenko.

This news was announced at a joint press conference between Bellator and RIZIN Fighting Federation early on Wednesday morning (Wednesday night in Japan).

Fedor Emelianenko was least seen in action when he was knocked out by Ryan Bader in January. This bout marked a failed attempt to capture the vacant Bellator heavyweight title, and was preceded by a pair of stoppage wins over Chael Sonnen and Frank Mir.

Rampage, on the other hand, has not fought since September of 2018, when he battered his arch rival Wanderlei Silva to a TKO win. Prior to this victory, he gave up decisions to wrestling specialists Chael Sonnen and Muhammed “King Mo” Lawal.

At Wednesday’s RIZIN-Bellator press conference, it was also announced that Bellator’s debut in Japan will feature three Bellator vs. RIZIN fights, pitting the stars of each organization against one another.

In addition to this Fedor vs. Rampage fight, we can expect a host of other matchups to be announced for this event in the coming days, and more still announced for RIZIN’s huge end-of-the-year celebration.

Who you got? Fedor or Rampage? What other matchups would you like to see on the card?