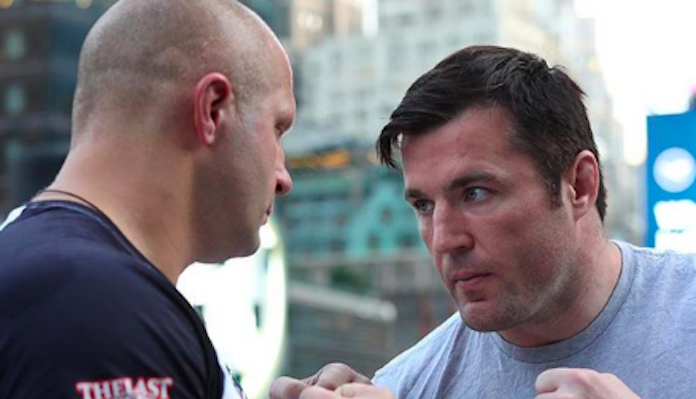 Last weekend, in the main event of Bellator 208, former UFC middleweight and light heavyweight title challenger Chael Sonnen was stopped in the first round by heavyweight legend Fedor Emelianenko.

Post-fight Sonnen was quick to offer praise to Emelianenko. In fact, Sonnen says he considers Fedor Emelianenko the best heavyweight in MMA history, while he also considers Fabricio Werdum and Josh Barnett frontrunners in that debate.

“I have it down to three,” said Sonnen recently on The MMA Hour (transcript via MMA Fighting). “My three might surprise you and I actually enjoy this topic. I have Fedor in the conversation, I have Werdum in the conversation but I I‘m always surprised people don’t say Josh Barnett in that conversation. I feel like they weren’t watching back in 1999 and 2002 and 2003.”

“So I have those three guys. What order do you want to do it? I would probably put Fedor at number one. I love the debate, but for me it’s down to those three.”

Another fighter that is often mentioned when debates about MMA’s best heavyweight arise is former UFC heavyweight champion Cain Velasquez. While Chael Sonnen considers Velasquez one of the best, he says the former champ’s stretch of inactivity rules him out of the debate.

“I think Cain took himself out” Sonnen said. “How disrespectful, but Cain sits in the locker room to much to put him on that list. He had some fantastic moments and I’m not sure there was anybody alive that could beat him. But all we can do is discuss that because just didn’t walk out there and show it enough.”

“But these are just conversations anyway,” he added. “It comes to down to popular opinion. You’ve got to be able to out-argue the guy across from you. That’s how these pound-for-pound greats last. But I do think Cain shortened himself. He was the most intimidating heavyweight when he was in there. I’d put him right up there with George Foreman as far as the scariest guys to get into the ring with. But I kind of have him as a fourth or a fifth and out of the conversation.”

Do you agree with Chael Sonnen on this one?