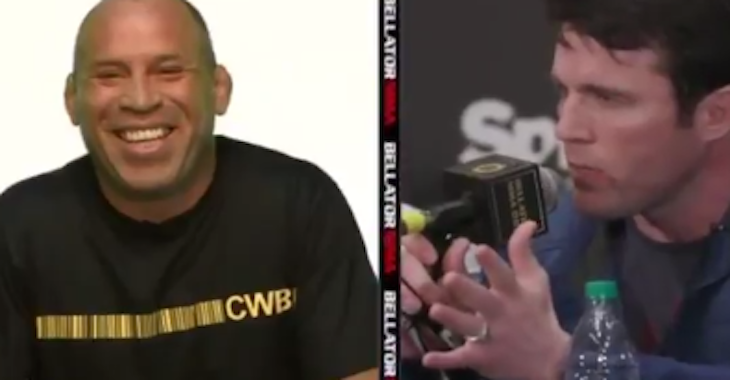 On June 24th, Bellator MMA will simultaneously make it’s first stop in New York City, and take its second crack at the pay-per-view business. It will do so with a stacked card titled Bellator NYC.

This Bellator NYC card will be headlined by a light heavyweight showdown between long-time rivals Chael Sonnen and Wanderlei Silva. The co-main event, meanwhile, will be a rescheduled heavyweight bout between MMA legend Fedor Emelianenko and dangerous UFC veteran Matt Mitrione. The other confirmed fights for the main card, finally, are a pair of title fights, as Michael Chandler defends his lightweight title against Brent Primus and Douglas Lima defends the welterweight throne opposite new Bellator signee Lorenz Larkin. On Tuesday afternoon, the fighters mentioned above joined the media in New York City (Silva did so via Skype).

It should come as no surprise that the most memorable moments of this anticipated presser came from the legendary trash-talker Chael Sonnen, and the man who hates him most, Wanderlei Silva.

The fun began when Sonnen scolded Silva for failing to show up to the press conference.

The fun between the pair continued when Sonnen demanded that Silva refer to him as “Mr. Sonnen,” and Silva replied by saying “suck my balls.”

In the spirit of Ali-Frazier, Wanderlei and Chael have brought their A-Game to MSG. pic.twitter.com/kUig2C3tk0

From there, Sonnen compared the absentee Silva to a shoe, removing his own shoe to illustrate his point. All the while, Silva could be heard breathing heavily through his battered nasal passages on Skype.

Does the NYSAC perform mental evaluations before licensing? pic.twitter.com/7Xy1EB1f04

When it came time for staredown photo-ops, Sonnen wandered onto the stage alone, once again declaring himself the “king of pay-per-view,” and referring to Madison Square Garden as a “decrepit building in a concrete ridden city.”

When we last saw Sonnen in action, he came up short in his Bellator debut, succumbing to a first round submission dealt by the retiring Tito Ortiz. Silva, meanwhile, has not stepped onto the canvas since a 2013 knockout of Brian Stann.

Who do you think wins this Chael Sonnen vs. Wanderlei Silva grudge match? Sound off, PENN Nation!