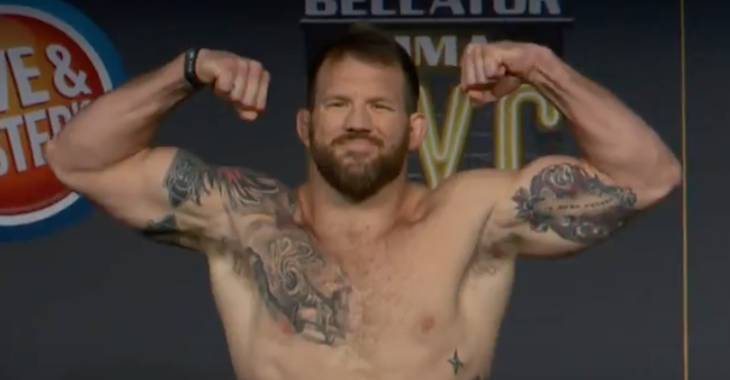 Round one begins and Phil Davis is quick to shoot in for a takedown attempt. He presses Bader up against the cage but Ryan remains calm and is able to break free from the position. Bader is throwing some kicks early here. Neither fighter seems to have found their range in regards to boxing. Davis once again drives in for a takedown attempt but it is not there. Phil gathers himself and begins working some hard low kicks on Bader. Ryan comes forward and lands a left hand. Both men exchange body kicks. Round one comes to an end.

Round two begins and Davis is pumping his jab early but cannot find a home. Phil just misses with a roundhouse kick. Bader comes forward and scores with his jab. Davis with another head kick attempt but it misses. He shoots in for a takedown but Bader says no. Ryan connects with a jab and then another. A good right hand finds a home for Bader just before the horn sounds to end round two.

Round three begins and Davis scores with a beautiful superman punch. Phil working the body now, he lands a hard kick to the midsection of Bader. Phil responds with a left hand but he needs to start throwing combinations. So far it has been one punch and done for Bader. Davis scores with a left hook. Bader replies with a nice straight right over the top. Bader tries to time a knee from Davis and shoots in for a takedown. He gets it but Davis is able to reverse the position. Round three comes to an end.

Round four begins and Davis connects with a hard kick to the body of Bader. Phil shoots in but cannot secure a takedown. Davis takes the center of the cage and then misses with an attempted roundhouse kick. Still, he leaps in with a three-punch combo that connects. Both fighters score with solid body kicks before the horn sounds to end a very close round four.

Round five begins and Davis comes out throwing punches. He lands a crisp left hand. Bader fires back with a leg kick but Davis counters that with a right hand. Davis again tries to land a roundhouse kick but it is nowhere close to on target. Bader shoots in for a double leg takedown and gets it. He immediately moves to the back of Davis. Phil is able to get up and eventually shake free. Bader with a good jab. Davis replies with a left hand. Round five comes to an end.