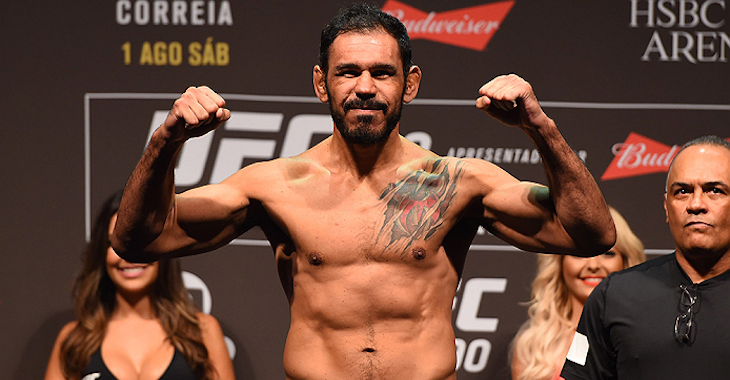 Meanwhile, “Lil Nog” Antonio Rogerio Nogueira will be fighting for the first time since November of 2016 where he suffered a third-round TKO loss to Ryan Bader.

Round one begins and Rogerio Nogueira immediately takes the center of the octagon. Alvey paws with his jab and then lands an inside low kick. He leaps in with a left hook but Rogerio Nogueira is able to duck under the shot. Antonio moves forward and lands a jab to the body of Alvey. Sam returns fire by landing a shot right hook. Lots of pressure here from Antonio. Alvey lands an inside low kick. Rogerio Nogueira motions to bring it on. The Brazilian misses with a right hand and Alvey lands a counter left over the top. Antonio comes forward with a left hand over the top. He lands another. Sam Alvey smiles but I don’t think he liked that. More pressure now from Rogerio Nogueira, but he eats a low kick while coming forward nearly tripping over in the process. Alvey with a jab. He lands another inside low kick. Antonio returns fire with one of his own. Two minutes remain in round one. Both men connect with punches to the body. Alvey snaps a right jab in the face of the Brazilian. Alvey with a nice left hand but Nogueira counters beautifully with a hook. Sam decides to circle out. He leaps in and connects with a big left. That appears to stun Rogerio Nogueira. The Brazilian is now on the retreat. Alvey chases after him but the horn sounds to end round one.

Round two begins and Sam Alvey lands a jab and then a low kick. Rogerio Nogueira comes forward with a big left hand and then a right behind it. That appears to hurt Sam. Alvey is on the retreat but Rogerio Nogueira is all over him with punches in bunches. He gets Sam against the cage and drops him with a monster punch. This one is all over as the referee decides to step in! WOW!

Antonio Rogerio Nogueira def. Sam Alvey via KO at 1:00 of Round 2