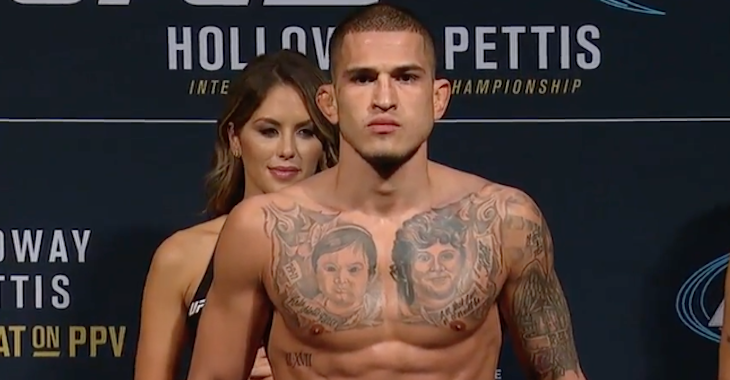 Former UFC lightweight champion Anthony Pettis had a bit of a tough run as a featherweight. Though he defeated Charles Oliveira in his first fight in the division, he would be TKO’d by Max Holloway in his second – which really wasn’t even technically a featherweight bout, as he missed the division’s 145-pound limit.

After his tough loss to Holloway, Pettis confirmed that he’d had enough of the rather difficult cut to featherweight, and that he planned to return to the lightweight division where he once wore gold.

According to a report from Brazilian publication Combate, the former champ now has an opponent for this lightweight return. He’ll apparently be taking on accomplished lightweight veteran Jim Miller at UFC 213, which goes down in the combat sports mecca of Las Vegas, Nevada this July 8.

Prior to his run at featherweight, Pettis lost three-straight at lightweight, first losing the title to Rafael Dos Anjos, then giving up back-to-back decisions to Eddie Alvarez and Edson Barboza.

Miller, meanwhile, was last seen in the Octagon in January, when he gave up a decision to Dustin Poirier in an action packed fight. Prior to this loss to Poirier, Miller was on a nice, three-fight streak, having picked up a TKO win over Japanese legend Takanori Gomi, and decision defeats over fellow veterans Joe Lauzon and Thiago Alves.

With this newest addition UFC 213 continues to evolve into one of the biggest fight cards of the year.

At the moment, it has been confirmed that the card will include a bantamweight title fight between Cody Garbrandt and TJ Dillashaw, a heavyweight bout between Fabricio Werdum and Alistair Overeem, and a welterweight war between Robbie Lawler and Donald “Cowboy” Cerrone. The card is also expected to include a women’s bantamweight title fight between champ Amanda Nunes and challenger Valentina Shevchenko.

Who do you think wins this Anthony Pettis vs. Jim Miller lightweight battle?