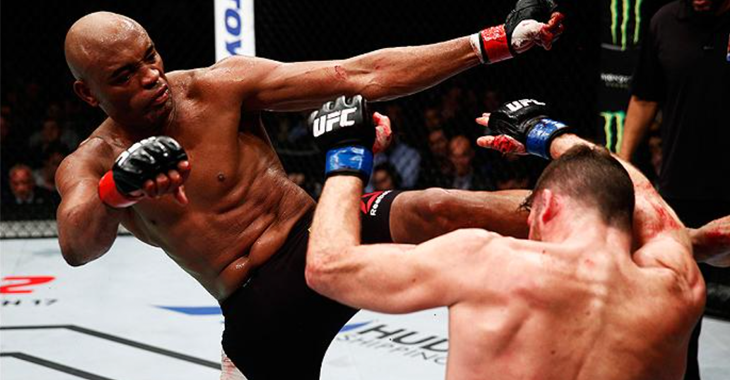 Michael Bisping scored the biggest win of his mixed martial arts career this past Saturday in London, when he defeated former UFC middleweight champion Anderson Silva via unanimous decision.

The fight was very close and many fans thought that “The Spider” should have got the ‘nod’ from the judges when all was said and done.

Anderson Silva called the decision “total corruption” and now his team is requesting that the commission review and overturn his loss to “The Count”.

“He felt a kick he landed in the first round, thought he cracked his leg and a screw moved,” Dorea said. “That limited his movements, made him stop attacking for a moment. I asked him to attack, but he said ‘professor, I’m feeling it, I have no confidence’. I said ‘use your heart, you’re Anderson Silva, go after him’. That slowed him down a bit. Bisping attacked more, but less effectively. Anderson was more effective. I hope the commission reviews this result because this is bad for the sport. Even Dana White saw that way. Everybody knows who won the fight.”

“I disagree (with the decision). First of all, I disagree with the knockout,” Dorea said. “He landed the knee, (Bisping) went down completely out. Anderson stopped hitting him, celebrated. He couldn’t have pushed forward, but stopped. According to (Silva), he looked to the guy and he was bad. And Herb Dean begging him to come back… I never saw something like that in the fight world, the cornerman bringing the stool next to where he went down. The referee told him to come back up, and he didn’t. The fight is over. He couldn’t even go back to his corner. Almost two minutes have passed between rounds. The fight is over, winner by knockout.

As for the judges scorecards, Dorea had this to say:

“Let’s talk about the scorecards now. Anderson lost the first and second rounds, and won the third really well. How do you score a round like that? If the fight wasn’t over by knockout, you can’t score it (10-9) like the others. He won the fourth round, a close one, and won really well the fifth. To me, he won the fight.”

Do you think the commission should even consider reviewing the Silva vs. Bisping decision from last Saturday? Sound off PENN Nation!