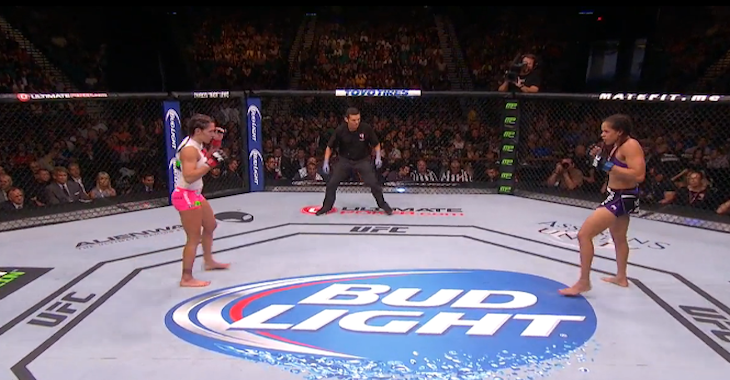 On Friday night, in the main event of the stacked UFC 207, Amanda Nunes made her first successful defense of the bantamweight title she won from Miesha Tate in July. She did so with a 48-second mauling of women’s MMA trailblazer Ronda Rousey.

With a firm grip on the UFC women’s bantamweight title, Nunes finds herself in the crosshairs of the division’s many talented competitors, from Valentina Shevchenko and Juliana Pena (who fight on January 28), to Raquel Pennington, to Cat Zingano.

In the wake of Nunes’ win, Zingano was apparently inspired to head over to the champ’s Instagram page to take a look at the belt. When she attempted to do so, however, she realized she’d been blocked by Nunes, which prompted a callout on social media.

I go to take a look at the belts, just to find I've been blocked by the @UFC champ, @Amanda_Leoa …sheesh. Why you mad homie? 😒😏😈 pic.twitter.com/cReF4Irptz

This jab from Zingano prompted a response from the champ, who suggested that if Zingano wants to see pictures of her, she can try a Google search.

@MMARoasted @ufc You don't like me, you can find the photos on Google. 😛😂

Nunes and Zingano, of course, have plenty of history together. They collided on the main card of UFC 178 in September of 2014. On that night, Zingano weathered and early storm to TKO Nunes in the third round.

Nunes has not lost since, rebounding with defeats of Shayna Baszler, Sara McMann and Valentina Shevchenko, before winning the title from Tate and defending it against Rousey.

Since defeating Nunes, Zingano has gone a tough 0-2, first losing in 14 seconds to Ronda Rousey, then giving up a decision to Juliana Pena on the undercard of July’s UFC 200. That said, she remains one of the bantamweight division’s finest competitors, and is probably only a win or two removed from a rematch with the champ.

Do you want to see Nunes and Zingano go at it again in the Octagon? If they did, who do you think would come out on top? Sound off, PENN Nation!