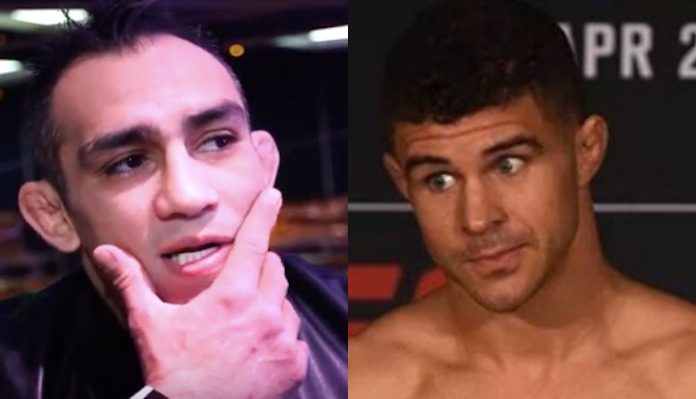 Al Iaquinta was briefly expected to return to the cage opposite Justin Gaethje in the main event of the upcoming UFC Lincoln card. Regrettably, Iaquinta withdrew from this fight, citing nagging injuries. He was subsequently replaced by James Vick.

According to Ariel Helwani, Al Iaquinta is now healthier than he’s been in some time, and he’s keen to return to the cage soon. More specifically, he’d like to fight this November against former interim lightweight champion Tony Ferguson, who he apparently “can’t stand.”

Just spoke to @ALIAQUINTA. He said he’s finally healthier than he’s been in years.

He wants to fight the recently medically cleared @TonyFergusonXT next. Any card in November (MSG, China, TUF Finale …”)

“Just spoke to [Al Iaquinta],” Helwani reported on Twitter. “He said he’s finally healthier than he’s been in years. He wants to fight the recently medically cleared [Tony Ferguson] next. Any card in November (MSG, China, TUF Finale …) ‘Can’t stand that guy,’ he said.”

It didn’t take long for Tony Ferguson to reply to this callout from Al Iaquinta. In his eyes, the fighter turned real estate agent is trying to hard — just like Kevin Lee, who Ferguson vanquished in October of 2017.

Trying Too Hard Kid – Like @MoTownPhenom You Both Had Your Chance & Fucked It Up. You Sell Houses, I Build & Buy Em’ -Take Notes- 🇺🇸🏆🇲🇽

“Trying Too Hard Kid,” Ferguson said in one of his trademark over-capitalized Tweets. “Like [Kevin Lee] You Both Had Your Chance & Fucked It Up. You Sell Houses, I Build & Buy Em’ -Take Notes.”

Al Iaquinta last fought in April, at UFC 223, when he came up short to Khabib Nurmagomedov in a last-minute title fight. He was originally supposed to fight Paul Felder on the card, but stepped up to replace Max Holloway, who was in turn replacing the injured Tony Ferguson. Ferguson, meanwhile, has not fought since his defeat of Kevin Lee.

Does a fight between Al Iaquinta and Tony Ferguson interest you?