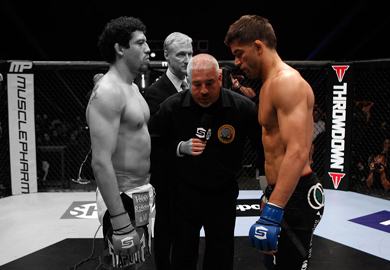 By Evan Stoumbelis
This past Saturday, fans saw Gilbert Melendez defend his Lightweight belt in a split-decision victory against Josh Thomson. This fight served as the rubber match for the two men, who split victories in their prior meetings.

The decision however, was a controversial one, with fans booing Melendez after he was declared the winner, and later on jumping in to support who they thought was the winner. Melendez even lashed out at a booing fan after the fight. Remember, just one week ago, Thomson was reported to have suffered a PCL tear, leaving everyone unsure of whether or not the fight would take place.

Thomson came into the fight looking like a man on a mission, he was aggressive and utilized his kickboxing in exchanges.  Especially front kicks and left head kicks, to stop Melendez from closing distance.  He scored a takedown in the first, and landed more strikes during exchanges, all while pushing the pace. In the fourth Thomson came very close to finishing Melendez with the rear naked choke at the end of the round but was unable to do so. In the fifth Thomson poured it out and left it all in the octagon, landing left head kicks, and flurries of punches, while securing takedowns.  Unfortunately, in MMA scoring, its not how you finish, because if that was the case Thomson would have won.

I gave rounds 1, 4 and 5 to Thomson, unfortunately the judges disagreed. What do you think PENNATION? who do you think deserved the win?