As many expected, Canelo Alvarez was able to make quick work of Rocky Fielding this evening, dispatching the English fighter in just three rounds.

Canelo peppered Fielding with shots to the body and head throughout the fight, procing he was clearly in a class above Rocky.

Alvarez scored a total of four knockdowns in tonight’s short fight, the fourth knockdown coming from a brutal shot to the body.

Check out the nasty finish below courtesy of Zombie Prophet.

Following is emphatic win, it is expected that the Mexican star, Alvarez, will return to the middleweight division in order to defend his WBA and WBC titles.

Daniel Jacobs or Demetrius Andrade could be next on the hit list for Canelo. Both men are current major title holders in boxings middleweight division.

A trilogy bout with Gennady Golovkin is definitely a future possibility for Canelo Alvarez. 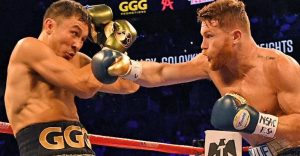 Alvarez defeated “GGG” in their most recent fight via majority decision.

Who would you like to see Canelo Alvarez fight in his next boxing appearance? Sound off in the comments section PENN Nation!