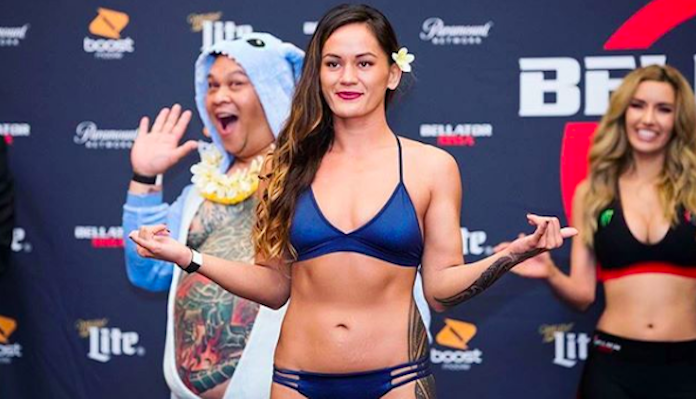 Macfarlane enters tonight’s main event sporting a perfect professional record of 8-0. The Hawaiian‘s most recent win came via submission over Alejandra Lara at Bellator 201 this past June in California.

Meanwhile, Valerie Letourneau has gone a perfect 2-0 since joining the Bellator ranks in December of 2017.

The Canadian most recently defeated Kristina Williams via unanimous decision at Bellator 201.

Round one was a bit of a feeling out process. Both women seemed tentative early, but overall Ilima-Lei Macfarlane was able to get off the more effective strikes.

After a closely contested second round, Ilima-Lei Macfarlane was able to take control in round three.

The undefeated Hawaiian champion locked up Letourneau in a triangle choke early in round three. While holding the Canadian in the submission, MacFarlane began unleashing some brutal elbows from off her back. Eventually the pressure of the submission hold mixed with the nasty strikes forced Valerie to tapout. Check out the finish below.

Who would you like to see undefeated Bellator women’s flyweight champion Ilima-Lei Macfarlane fight next? Sound off PENN Nation!