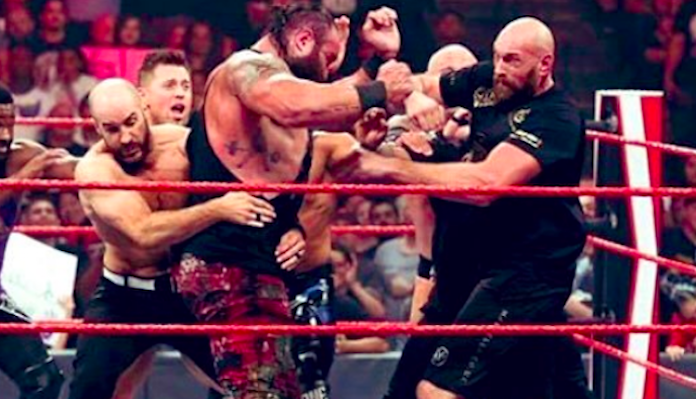 It's an all-out BRAWL between @BraunStrowman & @Tyson_Fury in the middle of the ring on #RAW! pic.twitter.com/AHdGdEEbaJ

Fury also got his hands on Cesaro after Raw went off the air.

Tyson Fury with the knockout blow to Cesaro after #RAW goes off air! pic.twitter.com/dkrQGFQ8B6

Tyson Fury is not the first boxer to let his fists fly in the WWE. Pound-for-pound legend Floyd Mayweather Jr. previously did the same, and the appearance generated a ton of buzz.

Fury’s WWE appearance, though not unanimously popularly among pro wrestling fans, has also been making headlines. And the boxing champ seems to have had a lot of fun with the experience.

Since his time in the WWE ring, he’s been jawing at Strowman on Twitter, and Strowman has not hesitated to fire back.

Take that…… let me know when u want more of these hands….. @BraunStrowman pic.twitter.com/ckiO2ideJd

Tyson Fury last set foot in the boxing ring in September, when he survived a nasty facial laceration to defeat Otto Wallin by decision.

“It was a great fight,” said Tyson Fury after the fight (transcript via the BBC).

“I got caught on the eye and that changed the fight. For the majority, I could not see out of the eye, then there was a clash of heads and I got cut again.”

What do you think of the boxer’s WWE appearance? Will we see him in the pro wrestling ring again?