Jake Paul squared off with former MMA champion Ben Askren in the headliner of tonight’s Triller event at Mercedes-Benz Stadium in Atlanta.

Paul (3-0), a YouTube star turned boxer, and Askren, a former Bellator and ONE champion, collided in the squared circle for an eight-round boxing match this evening.

Askren (19-2 MMA) had never boxed as a professional before, but obviously has a long and impressive combat sports record. A Olympic level wrestler, ‘Funky’ is the former ONE Championship and Bellator welterweight titleholder. He also went 1-2 in the UFC welterweight division, beating Robbie Lawler by submission, and losing to Jorge Masvidal and Demian Maia by knockout and submission respectively. 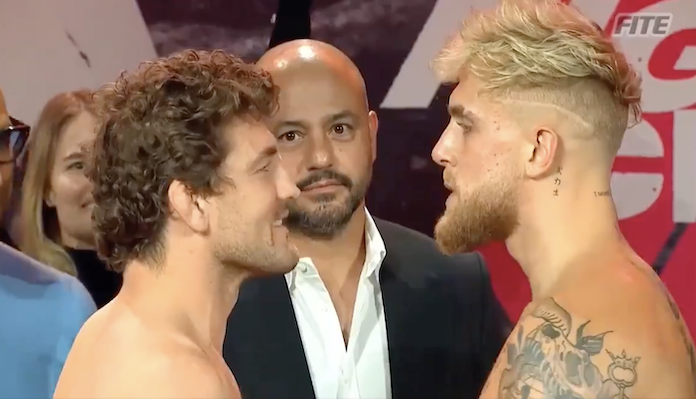 Meanwhile, Jake Paul had entered tonight’s Triller main event sporting a 2-0 record as a boxer, having picked up wins in a pair of celebrity boxing matches. The first of those wins came against YouTube personality Ali Eson Gib. The second occurred in November of 2020, when he shut the lights out on former NBA star Nate Robinson. While Paul is currently dedicated to his boxing career, he earned his celebrity on YouTube, where he has more than 20 million subscribers.

Tonight’s Triller main event proved to be a one-sided affair, like many MMA fans feared. Jake Paul was able to flatten Ben Askren with a right hand in round one which ultimately resulted in the fight being stopped.

Check out how the pros reacted to Paul defeating Askren below:

This is absolutely crazy! Come on @Benaskren ! Beat this dude Ass man

.@jakepaul congrats on smashing the tomato can.