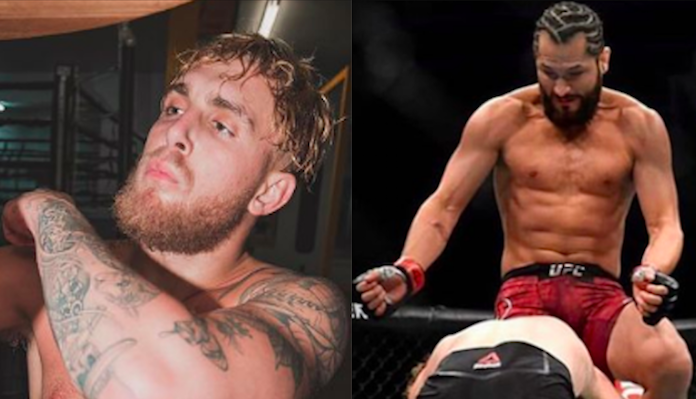 Jake Paul claims that Jorge Masvidal has been sending him perplexing direct messages while under the influence of alcohol.

Paul and Masvidal started off as friends, with ‘Gamebred’ previously helping the YouTuber prepare for his boxing match with Ben Askren. Jake went on to defeat ‘Funky’ by way of first round knockout and was praised by Jorge for his performance.

Things all started when ‘Gamebred’ said that Paul was in over his head with Woodley and was in for “a world of hurt”.

Jake Paul (4-0) quickly fired back at Jorge Masvidal over that prediction, dubbing the UFC’s BMF title holder as a “hoe”.

Paul went on to defeat Woodley by way of split decision that evening in Cleveland and claims that he’s been going back and forth with ‘Gamebred’ ever since.

“The most recent one is Masvidal and I, literally in the DMs just going back and forth with each other. He can’t type by the way. Like he legit can’t type, it’s the weirdest thing.” Paul said of Masvidal on the FULL SEND podcast (h/t Middle Easy). “I said ‘Bro, you need to get a grammar book because all this writing is f—king your s—t up,’” Paul said, before reading a message from Jorge as an example. I think he was drunk when he was (messaging me).”

According to Jake Paul, the following is one of the messages he received from what he assumes to be an intoxicated Jorge Masvidal.

“I fight because I love it, man. Money ain’t shit. I got tons of it. ‘I fight so I can brake (sic) ‘fools’ faces and enjoy the ride. You know you could ever see and chage (sic).”

Paul appears to be eyeing up Tommy Fury as his next opponent, although nothing has been made official as of this time.