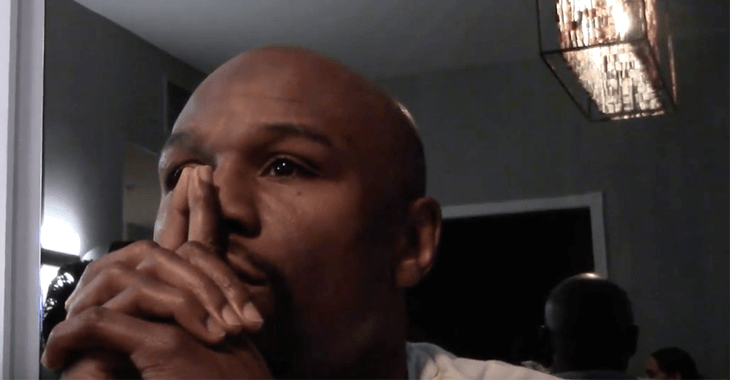 Talks of a potential Floyd Mayweather vs. Conor McGregor boxing match have the combat sports community going back & forth in arguments regarding who would win the potential matchup. While some believe that Conor McGregor’s reach advantage, combined with his precision and power, would result in the lightweight champion handing Mayweather his first loss, others believe that in a boxing match, McGregor would have no chance against the self-proclaimed ‘Best Ever’.

With McGregor currently on the sidelines for ten months ahead of the upcoming birth of his firstborn child, he and the undefeated prizefighter have continued to trade barbs through interviews and social media.

Recently, Mayweather threw fuel on the fire when he stated:

“I don’t give a fuck what night it was, I ain’t never taking no L. I’ll f–k McGregor up too. That punk ass McGregor. I’m a slap McGregor, I’m a slap the s–t out of McGregor when I see him.”

That didn’t sit too well with Fox Sports 1 ‘Undisputed’ host Skip Bayless, who went off on Mayweather, saying:

“Yesterday, Floyd stooped to low blow, after low blow, to blast after blast after blast, because he is trying to hit and run from a distance against Conor McGregor. At a safe distance. This is what you call ‘keyboard courage’. This is classic keyboard courage, ‘If I see him I’m going to slap the you know what out of him’. You know what, at almost 40 years of age, Floyd couldn’t slap the you know what out of a mannequin. You know it, and I know it. Floyd ‘Money’ Mayweather, is that what you call him? I’m going to start calling him Floyd ‘Bunny’ Mayweather, as in bunny rabbit because he doesn’t hit harder than a bunny rabbit right now, and we know he can run like a bunny rabbit. Run, run, run Floyd, and he will hit and run from Conor McGregor for the next few months. That’s all you’re going to hear. He’s going to stay relevant, taking pot shots from a distance, at a guy who would kick his behind in a boxing match! You know it, and I know it!”