Women’s featherweight contender Paige VanZant is set to return to the bare-knuckle ring.

’12 Gauge’ has been out of action since her decision loss to Rachel Ostovich at BKFC 19 in July 2021. That defeat set VanZant back to 0-2 in the bare-knuckle boxing promotion. She had previously lost to Britain Hart in February of that year.

Following that loss, the former UFC veteran decided to head to the pro-wrestling ring. Earlier this year, VanZant announced that she signed with the All Elite Wrestling promotion. She made her debut in May, winning a tag-team match before taking a hiatus.

Following that one-off wrestling match, Paige VanZant was set to return against Charisa Sigala in August. The bout was set to be the co-main event of BKFC’s maiden voyage to the U.K., with the headliner being Michael ‘Venom’ Page versus Mike Perry.

While the main event went off without a hitch, the women’s bout was pulled days before the event. In a bit of a weird situation, VanZant herself stated that she had nothing to do with the pull-out. The bout’s cancelation is still a mystery, months later. 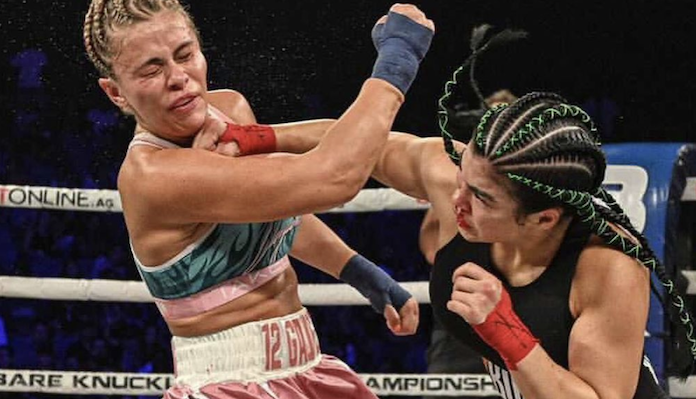 However, Paige VanZant is now slated to return to the BKFC ring, as David Feldman revealed in an interview with Curran Bhatia. The UFC veteran will return on February 27th in Albuquerque, New Mexico. As of now, it’s not known if VanZant will headline the event.

Furthermore, it’s not currently known who the women’s featherweight contender will face. Before her last fight, VanZant and BKFC confirmed that her last bout could be the last in the promotion, as her third outing in the bare-knuckle ring is the last on her deal.

In recent months, she has stated that she could return to MMA after she fights out her BKFC deal. However, VanZant has also noted that a UFC return is incredibly unlikely.

This article appeared first on BJPENN.COM
Previous articleJoe Rogan praises Israel Adesanya’s response to loss to Alex Pereira at UFC 281: “The way he responded to that loss is better than anybody ever”
Next articleBellator champion Vadim Nemkov reflects on 2015 loss to UFC champion Jiri Prochazka: “Maybe one day we’ll cross paths and fight again”
© Newspaper WordPress Theme by TagDiv