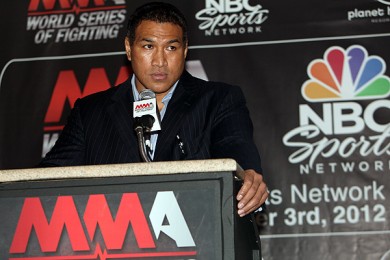 Sefo made it clear that he tells fighters to respect their opponents and that the scuffle between Jones and Cormier went too far. However, he also said that if he was in Cormier’s position he would have done exactly the same thing. Here’s some of what Sefo had to say on the situation.

“Me, personally, as a fighter, I’m not a guy that sits there and tries to stare you down,” he said. “I don’t need to do that. When that bell rings, you’re going to get a fight. So, when someone invades my space, I’m punching you, because you don’t need to get in my face.

“I would have reacted the same way Cormier did,” he said. “I think Jones put his head on Cormier’s head and that was that. That’s the risk of that, because people feel like their space is being invaded, and soon as that happens, someone’s going to throw, or push. So then it’s going to escalate to what happened yesterday.

“Sure, it might be good for TV or the drama, but to me, it really got out of hand. The people that turned up to watch that didn’t really get (what they were seeing), because I’m sure they were going to interview them, and that didn’t happen.”

Who agrees? Do you think Jones caused it by invading Cormier’s space, or was it all planned out before hand?