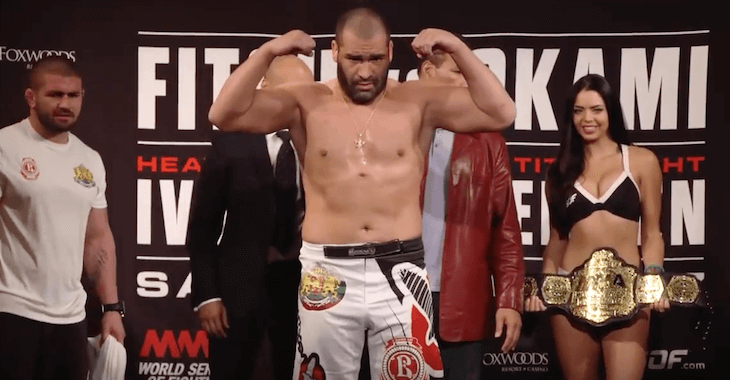 Last night, World Series of Fighting returned to the state of New York with WSOF 35, a card highlighted by three title fights.

In the main event of the evening, Bulgarian heavyweight champion Blagoy Ivanov attempted to defend his crown against dangerous UFC veteran Shawn Jordan. Ivanov made it look easy, dropping his experience foe less than two minutes into the fight, and polishing him off with a series of followup ground-strikes.

With this win, Ivanov moves to a strong 14-1 overall. Highlights of this impressive record include defeats of Kazuyuki Fujita, Zak Jensen, Ricco Rodriguez, Lavar Johnson, Smealinho Rama, Derrick Mehmen, Josh Copeland, and now Jordan. His lone loss came against former Bellator champ and current UFC heavyweight Alexander Volkov. Ivanov is perhaps most famous for defeating MMA legend and possible GOAT Fedor Emelianenko in a sambo match. With this latest win, which marks his third defense of the WSOF heavyweight title, he continues to build on his reputation as one of the best heavyweights outside the UFC.

Jordan, meanwhile, falls to 19-8 in defeat. He is now 1-1 since being released by the UFC in 2015, winning his WSOF debut by scoring a first-round TKO over Ashley Gooch, then being crumbled by Ivanov.

In the WSOF 35 co-main event, a new featherweight champion was crowned, as as prospect Andre Harrison defeated Team Alpha Male staple Lance Palmer via unanimous decision to steal the belt. With this impressive win, Harrison kept his perfect, 15-0 record intact. Other highlights of this fantastic record include defeats of Steven Siler, Desmond Green, Kurt Holobaugh, and Cody Bollinger. In defeat, Palmer falls to 11-3 overall.

The third title fight on the WSOF bill saw Bekbulat Magomedov and Donovan Frelow battle for the bantamweight throne, which was left vacant when former champ Marlon Moraes left the promotion earlier this year. After five rather insipid rounds, Russia’s Magomedov would earn this honor with a unanimous decision win.

What did you think of Blagoy Ivanov’s impressive WSOF 35 title defense against Shawn Jordan? Sound off, PENN Nation!