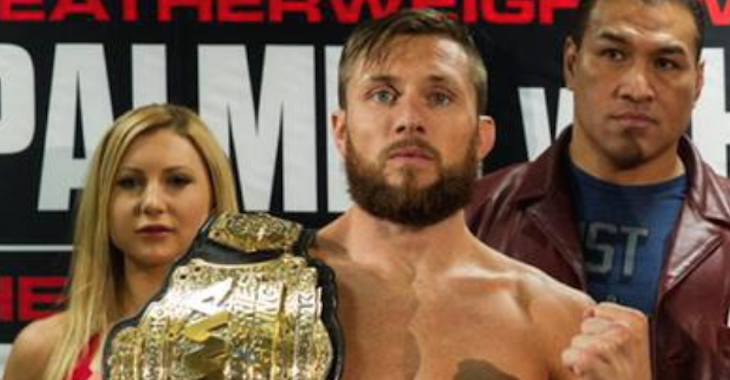 Palmer talked to MMAFighting and mentioned that he is fine where he is, at WSOF, but of course the goal is always to fight the best in the best organization. So he’s waiting eagerly for that UFC call right, maybe not.

“My end goal is to have the belt in whatever the best and biggest organization is and right now every body is happy saying that the UFC is the best organization. For competition, yes. For pay and being able to make a living, I wouldn’t say so much for most guys. There’s a few guys that make a great living with the UFC, but overall I think a lot of guys are way underpaid.”

“I just think if I was offered $100,000 a fight, I wouldn’t give a sh*t about sponsors. They can pay me a dollar from Reebok and I wouldn’t care. If I was making 50 and 50 to fight, then I wouldn’t care, but I wouldn’t go there for less than that. You’re fighting the best guys in the world and I feel that I’m a top-10 guy in the featherweight division. I definitely wouldn’t go to the UFC for less than 50 and 50 to fight those top caliber guys. I don’t see myself going in the UFC and fighting anybody out of the top 10 in my first fight.”

What do you think, should the UFC pay him that much to come over?