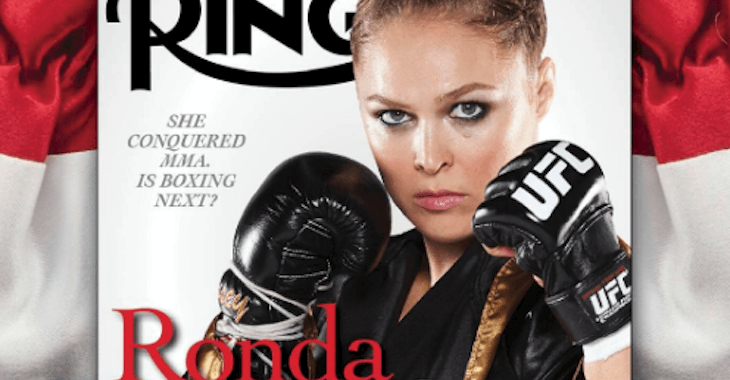 Recently, UFC women’s bantamweight champion Ronda Rousey landed a spot on the cover of ‘Ring’ magazine, which is a boxing magazine.

While UFC fans were impressed by Rousey gracing the cover of the famed boxing magazine, boxing fans were split down the middle. Some said that it was wrong of the magazine to feature a UFC champion rather than a boxer. Others said that Rousey being on the cover could draw new eyes to boxing, which many consider to be a dying sport.

SHE CONQUERED MMA. IS BOXING NEXT?: Check out the latest issue of The Ring featuring @rondarousey on the cover, along with our exclusive rankings— THE RING 100 WORLD’S BEST FIGHTERS. ON NEWSSTANDS NOVEMBER 15!! (Rousey 📷 by @ewillphoto) Also, see Ronda Rousey in the first episode of #InTheRing featured on the RINGTV/FACEBOOK page

What do you think of Rousey being on the cover? Good or bad for boxing’s image? Sound off below PENN Nation!