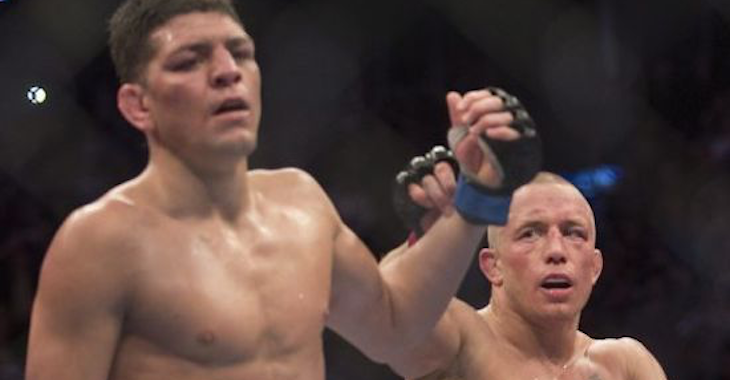 Former UFC welterweight champion Georges St-Pierre has been one of the only MMA fighters to not comment on the controversial Nick Diaz five year suspension, until now.

GSP recently talked to RDS, a Canadian news outlet, and talked about the situation. The former 170 pound king said he thinks the suspension is a lot and goes on to explain why he supports Diaz, a former rival and opponent.

“Personally, I think five years is a lot, especially if you compare his case to Anderson Silva or other athletes who got caught cheating and received a lighter suspension. I think they wanted to use him as an example because of how colorful he is and of the attention he gets. They wanted to create a precedent similar to what has been done in Olympic sports with Marion Jones, for example.

“Unfortunately, it happened to fall on him, but I think everyone is entitled to a second chance.”

“Nick is a very charismatic, he makes a lot of attention, but it’s not someone I hate. I have no hatred toward him. Many things had been said before our fight, but it was only in sporting terms. I did not take anything personal.

“We need guys like him in the sport, and I hope he will return soon. If I can help in one way or another, without getting in trouble, it’ll make me happy to do so. This is someone that I like, and I wish him the best of luck.”