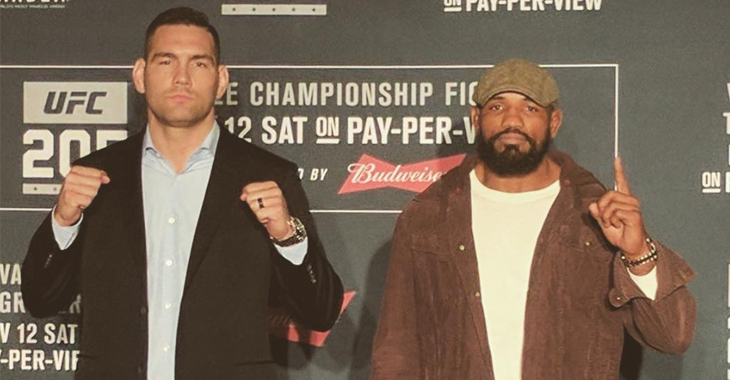 Tomorrow night, on the main card of UFC 205, streaking middleweight contender Yoel Romero will collide with former champion Chris Weidman in a bout that could well earn the winner a shot at reigning middleweight champion Michael Bisping. In advance of this pivotal showdown, Romero made an appearance on BJPenn.com’s Rapid Fire to speak with host Chris Taylor.

Though Romero is confident that he’s got what it takes to defeat Weidman at UFC 205, he was quite complimentary of his upcoming foe’s skills.

“What I think about Chris [Weidman] is he is a strong guy with stupendous wrestling,” Romero said. “He is a fantastic fighter obviously. He has a lot of history. He destroyed Anderson Silva two times. He defeated Lyoto Machida, who is an ex-champion of the UFC. He also has a win over Vitor Belfort too. So of course he is a fantastic athlete.”

When asked for his opinion on Weidman as a person, Romero was also quite complimentary. The streaking Cuban contender also suggested he was prepared to forgive Weidman for his recent steroid use allegations, which stemmed from Romero’s early 2016 run-in with USADA. This run-in was ultimately deemed to be the result of Romero’s consumption of tainted supplements.

“He did project some wrong ideas about me and got pretty ugly in regards to my stuff with USADA,” Romero said. “But you know what? I forgive him.”

Though Romero is complimentary of his upcoming foe’s skills, and harbors no ill will towards him, he is confident he’ll emerge the victor this Saturday night.

“I am going with the plan that God has in place,” Romero said. “All I know is that God has a plan that is in place for what is going to happen on Saturday night. But, I told God if you want me to go to New York, then it is you that has to go before me. Because you’re not going to embarrass your son. Because you are going to have your son be victorious. That’s why  I am here.  Because I know that God will give me this victory. I don’t  know what area is the one that is going to make it happen. Whether it is jiu-jitsu, wrestling, kickboxing, Muay Thai, I don’t know. The only thing I do know is that victory will be mine, because God is on my side.”

Do you think Yoel Romero can defy the odds and take out Chris Weidman at UFC 205? Sound off, PENN Nation!