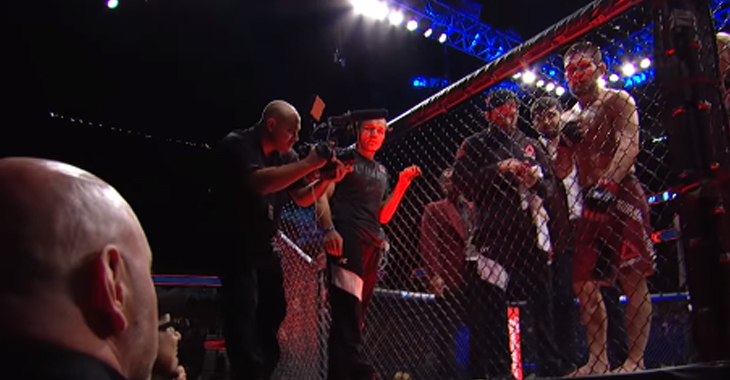 It seems like Khabib Nurmagomedov is making up for lost time. His dominant performance over Michael Johnson at UFC 205 was November of 2016. He didn’t fight until he met Edson Barboza in the Octagon at UFC 219. He not only made weight, put on a ‘Performance of the Night’ against a top five lightweight, but he hasn’t stopped talking since. In the new preview for UFC’s ‘The Thrill and the Agony’ episode, it reveals what Nurmagomedov said to White directly after his UFC 219 victory.

“I’m here for three months without my family. My wife is pregnant. I didn’t cry one and a half years, ‘Oh, my wife is pregnant,’ but I came here like a man because I try to stay busy. Without an injury, I can smash all lightweights.”  —Khabib Nurmagomedov right after beating Edson Barboza at UFC 219.

As we know by now, this post-fight message was just a teaser for a much longer message that Khabib Nurmagomedov had for Dana White. He even waited on the boss outside of the T-Mobile arena in Las Vegas by sitting on his car with an extra hat and a fiery speech that echoed his thoughts after beating Barboza.

“I tell [Dana White] hey, today when I fight, my son is born. I tell him hey, you remember one year ago? All MMA fans one year waiting for Conor [McGregor’s] son, but I’m here. For my fans, for my legacy, for my history, for everything. I need real fight. Tony [Ferguson] or Conor. Doesn’t matter. Please give me both. He said, ‘You deserve everything what you want.’ And he told me, ‘Performance of the night is yours.’” — Khabib Nurmagomedov speaking to TMZ Sports.

It looks like all of it paid off though. Just yesterday, Dana White announced that Khabib Nurmagomedov’s next fight will be against Tony Ferguson. Whether it will have an interim or the undisputed title on the line, will be up to how soon Conor McGregor wants to return.