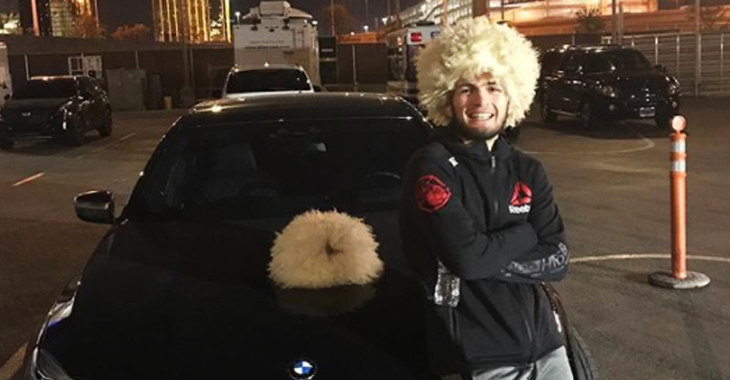 Imagine watching Khabib Nurmagomedov dominating arguably the most dangerous striker in the lightweight division. Not only that, but somehow he’s talking to you while he’s doing it. Now imagine that this man is waiting on your car after UFC 219 to talk with you. That’s what happened to Dana White at UFC 219. Nurmagomedov greeted White with his signature ‘papakha’ hat and a speech to end all post-fight speeches. Making the point that Conor McGregor took a paternity leave from the UFC for his son’s birth, while Khabib stayed and beat Edson Barboza.

“I tell [Dana White] hey, today when I fight, my son is born. I tell him hey, you remember one year ago? All MMA fans one year waiting for Conor [McGregor’s] son, but I’m here. For my fans, for my legacy, for my history, for everything. I need real fight. Tony [Ferguson] or Conor. Doesn’t matter. Please give me both. He said, ‘You deserve everything what you want.’ And he told me, ‘Performance of the night is yours.'”

On the day of his long-awaited return to the UFC, @TeamKhabib and his wife welcomed a baby boy to this great world, I’m told. Baby was born back home in Dagestan. They now have a girl and a boy. Mabrouk to the Nurmagomedov family!

“From Dagestan, we have more than 15 fighters in UFC and we have more than they’re with Irish fighters. Now, everybody forget about [McGregor] because he doesn’t want real fight. He fight with only like 45-years old Floyd Mayweather or marijuana guy who lose 10 times in UFC, Nate Diaz.  You know, like this is crazy. He has to defend his belt. [It would cost] zero [to get me to fight McGregor]. Zero, man. I don’t need money. I need only real fight. Fight for the title. I don’t fight for the money, I fight for my legacy, I fight for history, I fight for my people. That’s why I am here. Three rounds? I need like 50, 60 rounds. I want to fight all night. This is what I want. I need Tony and Conor same night.” — Khabib Nurmagomedov speaking to TMZ Sports.

Tony Ferguson. Conor McGregor. Individually, or both. That’s what Khabib Nurmagomedov wants. Who else could Nurmagomedov fight? He came back and put to rest the only criticism that anyone could have for his career by making weight, then took out an elite fighter in Barboza instead of a fight with Ferguson that fell through. Just like he was sitting on Dana White’s car after UFC 219, The Eagle will be waiting to see if McGregor unifies the title with Ferguson while tenderizing him with trash talk and fans froth at the mouth at both of these match-ups..