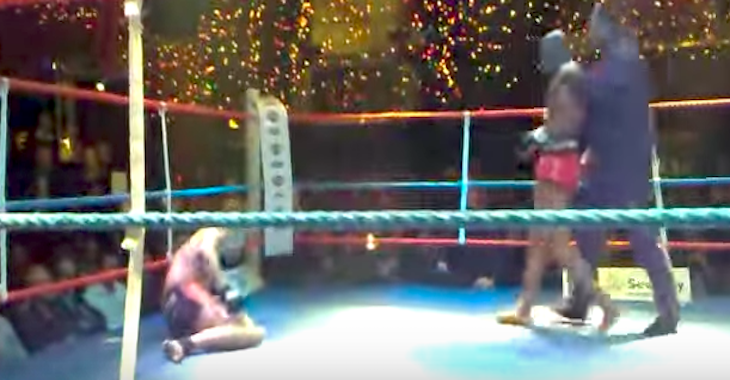 This Saturday, in the co-main event of UFC 213, surging Cuban contender Yoel Romero will collide with Australia’s Robert Whittaker for the interim UFC middleweight title.

Romero will enter this fight with a reputation as one of the best middleweights on earth. He’s on a 10-fight win-streak. This streak has seen him dispatch game opponents like Clifford Starks, Derek Brunson, Brad Tavares, Tim Kennedy, Lyoto Machida, Ronaldo “Jacare” Souza, and most recently, former UFC middleweight champ Chris Weidman, who he flattened with a flying knee. He’s a fantastic 13-1 as a pro mixed martial artist.

Needless to say, Romero has come along way from his MMA debut, which pitted him against Sascha Weinpolter in Nuremberg, Germany in 2009. Back then, he was just a former Olympian with a tremendous amount of potential.

In his debut, Romero reaffirmed his massive potential as a mixed martial artist by mauling his outmatched foe to a TKO win in just 48 seconds.

Watch Romero’s fantastic MMA debut in the video below. Note: the video has mislabeled Romero’s name, but this is indeed the same Cuban powerhouse that is taking on Robert Whittaker this weekend.

UFC 213 will be headlined by a women’s bantamweight title fight between champion Amanda Nunes and challenger Valentina Shevchenko. This bout will be a rematch of a 2016 bout, which Nunes won with a close decision.

The card will also feature a heavyweight rematch between decorated veterans Alistair Overeem and Fabricio Werdum, and a lightweight scrap between former champ Anthony Pettis and ever-dangerous journeyman Jim Miller.

Do you think Yoel Romero wins interim middleweight gold at UFC 213 this Saturday?