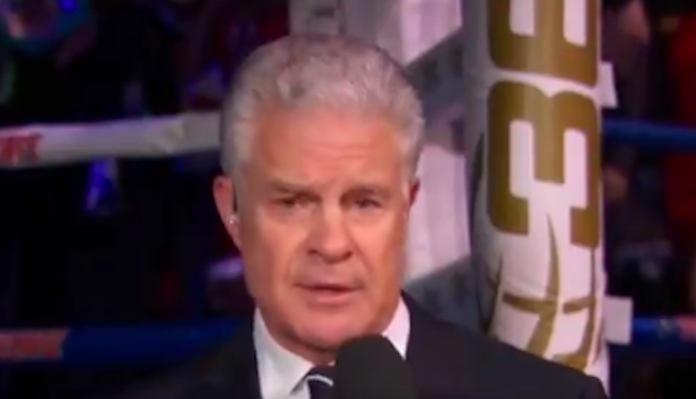 HBO Boxing is no more.

Last Saturday night, the storied boxing franchise aired its final card. The event, which went down in front of a small, quiet crowd in the StubHub Center in Los Angeles, featured victories from Cecilia Braekhus, Claressa Shields, and Juan Francisco Estrada, and several others. Yet perhaps the most memorable moment of the nights was veteran commentator Jim Lampley’s eulogy for HBO Boxing.

Jim Lampley's final sign-off on HBO's last ever boxing broadcast. The voice of the sport for generations. pic.twitter.com/ocu64KLARy

“This family was also a business,” a teary-eyed Lampley said after praising many of the stars and staff that made HBO Boxing so successful, some of whom have passed away. “Every business has an organic beginning and a natural, inevitable end. Here at HBO Boxing, the end has come. We thank you for watching. We urge you to turn elsewhere, to continue you support of this purest and most human of all competitive sports. And most of all, we thank the people who poured forth their bodies and their souls to write our 45-year history in the ring: the fighters. They are uniquely precious, and the life lessons they provided for us are timeless and indispensable.”

What followed was a 21-minute tribute, highlighting the best moments in the long and illustrious history of HBO boxing.

See if in full below.

What is your favorite moment from the last 45 years of HBO Boxing?