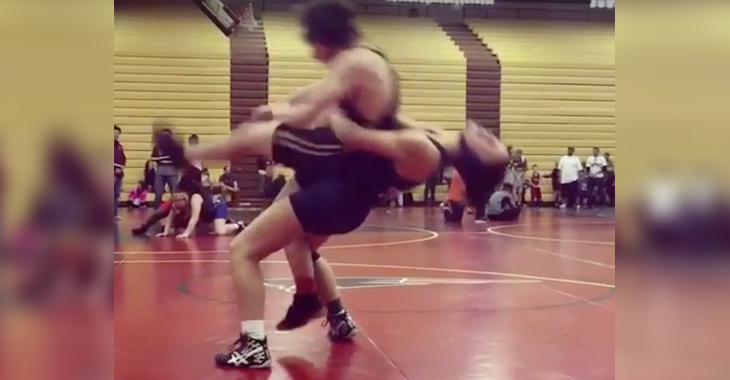 When your father is a former UFC champion, it seems that training in some sort of discipline in MMA will just come naturally.

It seems to be the case with the children of former two-time UFC heavyweight champion Frank Mir.

Mir posted a few videos to social media showcasing his talented kids, Isabella, Kage and Ronin, in a wrestling tournament where the Mir’s showed dominance against their competition.

Perhaps the scariest of all the performances from Mir’s children was from his daughter, Isabella who slammed her opponent not once, but twice with the powerful German suplex.

Mir was also surprised with his daughter as he used an emoji to show the expression on his face during the match. Mir captioned his post of Isabella’s match, “😳My face #mirkids #meadowsschool #future #wrestling.”

Mir was proud of his children and for good reason. The two posts from Kage and Ronin’s matches were uploaded with captions filled with happiness.

Frank Mir is 18-11 in professional mixed martial arts and won his first UFC heavyweight championship title against Tim Sylvia at UFC 48 back in 2004. Mir then went on to win a UFC heavyweight interim championship title against Antonio Rodrigo Nogueira at UFC 92 in 2008. Mir has not fought since March of 2016 where he tested positive for banned substances after fighting Mark hunt at UFC Fight Night 85 where he believes tainted kangaroo meat may be to blame for his failed drug test.

What are your thoughts on the next generation of mixed martial arts fighters? Do you think it’s a good idea to get young children training is various martial arts at a young age? Give us your opinion in the comment section on which martial arts discipline you feel is the best to start children off with to establish a solid foundation.