VIDEO | Felice Herrig breaks down to tears, feels she is ‘not young and beautiful enough’ to be promoted by the UFC

The UFC marketing machine can help push fighters to new levels of stardom if the athletes can back it up with good performances in the Octagon. However, with so many fighters in the UFC, how does the promotion choose which fighters to highlight?

UFC strawweight Felice Herrig is coming off a unanimous decision victory over Justine Kish at UFC Fight Night 112, now putting her on a three-fight winning streak. With going 4-1 in the UFC, Herrig feels that she isn’t getting as many opportunities as other fighters that may look more physically marketable.

“Honestly, if you want to know the truth, I just feel like I’m not young and beautiful for the UFC to want to promote me,” Herrig said filled with emotion at the UFC Fight Night 112 post-fight media scrum (transcribed by Danny Segura for MMA Fighting). “And it’s sad because I’ve really worked hard to be here and it’s hard to see, you know, these people who haven’t been through what I’ve been through and just got to the UFC at the right time, and they’re getting all these opportunities. I’ve seen how hard I’ve worked to get here and it just doesn’t matter because I’m not pretty enough and I’m not getting any younger, so I don’t know.”

Herrig added that she feels she should be ranked in the top 10. However, the UFC vet feels the way the UFC ranking system is currently set up, it is just one of the marketing tools that the promotion uses to push certain fighters they are choosing to back. 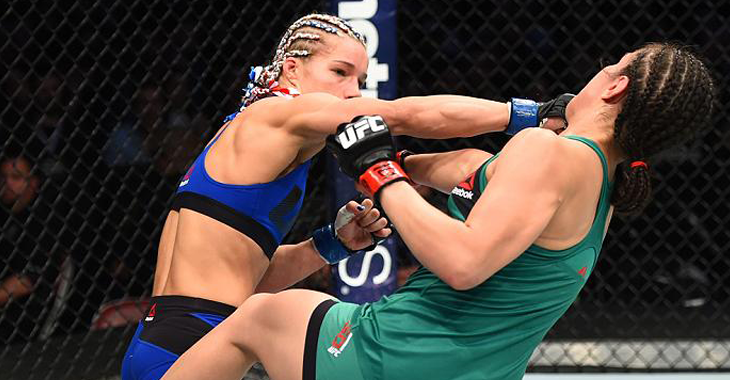 “I definitely think I should be in the top 10,” Herrig said. “But I also think – and I’ve said it before – that the rankings are a gimmick, a marketing tool to solidify matchups that the UFC wants to put out and to hype up fighters that aren’t really top 10 or anything. I just think that my performances are going to keep speaking volumes.

“I’m not trying to make this like a point finger at the UFC or Dana White or anybody,” Herrig said. “I know they have a business to run, but sometimes, and I’m not the only fighter who feels like this … we put a lot out there as fighters, and I don’t know, I feel like I’ve paid my dues and nobody can deny that. I’m a UFC fighter and I’ve worked my way to the top, so I would like a little more love, that’s it.”

What are your thoughts on Felice Herrig’s comments? Let’s discuss this one in the comment section.