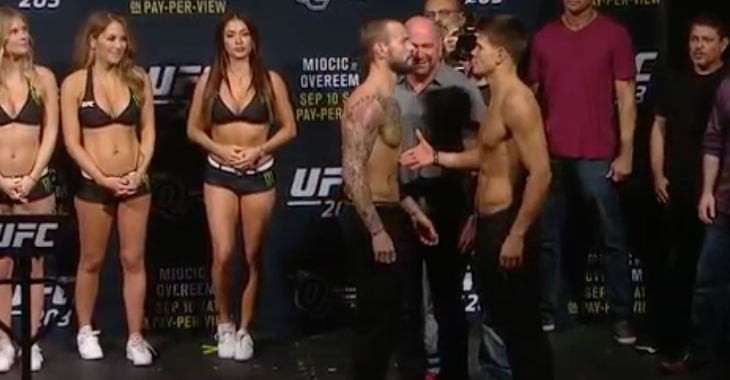 In just over 24 hours, former WWE star CM Punk will make the jump from the scripted world of pro wrestling to the unpredictable realm of mixed martial arts. He’ll do so opposite 24-year-old prospect Mickey Gall on the main card of UFC 203.

In advance of Punk’s first steps into the UFC’s Octagon, several of the pro wrestling world’s biggest stars have offered up their thoughts and words of encouragement.

The most recent wrestler to do so was Mick Foley, who took to Facebook to send some well-wishes Punk’s way. See that video below:

WWE star Mick Foley sends a message to CM Punk ahead of UFC 203.

“He’s a guy who led the charge for a long time. He’s one of the first indie guys in a long, long time to really shake [up] the main roster in WWE and he paved the way for Daniel Bryan, for myself, Dean Ambrose, Cesaro, and those guys.

“Say what you will about his attitude and his relationship with the company right now, but I wish him the best and I hope that he is successful — win, lose or draw.”

Ryback, whose real name is Ryan Reeves, also spoke with ESPN, echoing Rollins’ sentiment, and commenting on Punk’s courage – in spite of his recent beef with him.

“From a basic human being standpoint, he is showing courage doing something the majority of people on this planet will never do and that is step in a cage and fight in front of millions of people,” Ryback told ESPN. “I respect he wants to test himself and has the courage to do so. For that reason alone, while I don’t condone him saying the things he said about me, I want him to do well. Any man can beat another man on any given night, so I just hope he achieves what he is looking for in this and I will leave it at that.”

And then, there’s Brock Lesnar, a long-time WWE star who famously won the UFC heavyweight title on the strength of his collegiate wrestling background and his incredible physical gifts. Unlike Foley, Rollins and Ryback, he was not so quick to offer Punk his support.

“There will never be another Brock Lesnar,” the hulking former champ told ESPN when asked to comment on comparisons between him and Punk. “You can make all the correlations you want to the people you just stated, but none of them have ever main-evented and sold pay-per-views and put asses in the seats like Brock Lesnar. There is nobody.”

When he steps into the cage with the talented Mickey Gall tomorrow night, CM Punk will be short on advantages. He is, however, long on support, not just from his fans, but from many of his peers and colleagues from his pro wrestling days.

How do you think Punk’s UFC debut will go? Sound off, PENN nation!