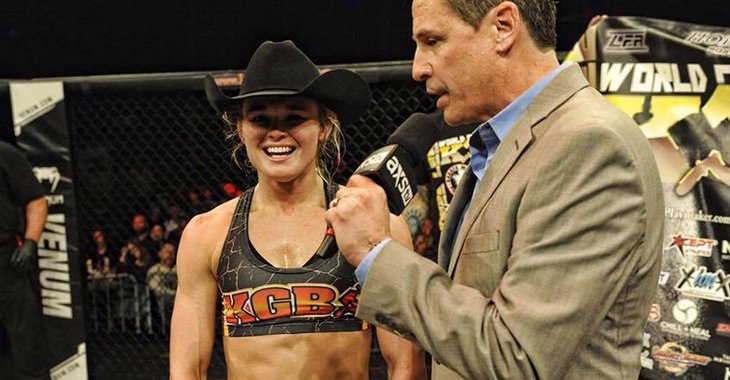 If for some reason or another you didn’t know who Andrea Lee was, you were about to. She’s been tearing it up in Invicta and then jumped over to Legacy Fighting Alliance to become their first ever women’s flyweight champion. This lady hasn’t been just winning, she’s been dominating and finishing opponents in exciting fashion. Those that have followed her career as a prospect had cause for excitement after it was announced she got the call from the UFC. She was slated to fight this coming weekend at UFC 216 against Kalindra Faria, but was surprisingly pulled from the card only a day later. Andrea Lee addressed the situation today in her own words.

“So, obviously I won’t be fighting next weekend, USADA is making me undergo the ‘USADA testing pool’ which requires me to take a bunch of random test over a period of 6 months BEFORE I can step into the UFC octagon. This is all because of the diuretic (a.k.a fluid pill) I took in 2016. I figured that when I was off my suspension that I wouldn’t have to deal with that anymore, obviously I was wrong. It’s not the UFC’s fault because they didn’t know about this USADA rule. I’m still signing a fight contract with UFC, that hasn’t changed, I just have to enroll in this program now so my time can start ticking. Look for me to fight next year the end of March or early April.

P.S. I’m not on drugs nor am I or have I taken any steroids. I’ve passed ALL my random drug tests this year. Thank you for your support.” — Andrea Lee from her official Instagram.

While she may not fighting next Saturday, Andrea Lee is still in the UFC and will have her debut rescheduled after she goes through the mandatory testing pool. On the bright side, the UFC will have already kick-started their own flyweight division and crowned the inaugural champion from The Ultimate Fighter 26 tournament. While the division is super young, if Lee steps in and finishes her first opponent, it’s possible she could already be contending for the belt.