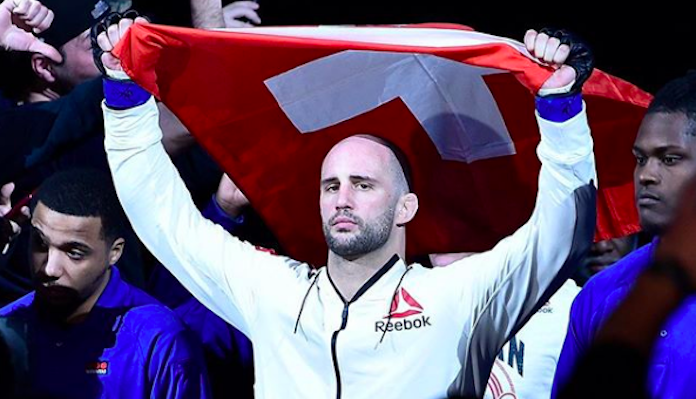 Volkan Oezdemir is excited to make the walk to the Octagon and get the bad taste of his last fight out of his mouth.

Oezdemir is set to face Paul Craig at UFC London as he enters the fight on a two-fight losing skid. He’s coming off a decision loss to Magomed Ankalaev at UFC 267 in a fight he is not happy with as he believes it’s the worst performance of his career.

“I think it is a fight where I didn’t pull the trigger enough. For me, personally, it was one of my worst fights, because I wasn’t myself in it,” Oezdemir said on Just Scrap Radio on BJPENN.com. “It is something I have been working on, to be more aggressive and make sure the fight ends with the finish in my favor.”

Once Oezdemir was ready to fight again, he thought he would face Jamahal Hill given the two have gone back-and-forth on social media. Yet, the promotion decided to book the Craig fight at UFC London which Oezdemir is ecstatic about.

“The first guy I was thinking I was going to get was Jamahal Hill, we had some exchanges back-and-forth on Twitter,” Oezdemir said. “But, Craig made sense because it is a UK card, so somebody from Europe to fight was good. Then, with my visa issues, it’s easier to fight in Europe.”

With Volkan Oezdemir not happy with his performance from his last fight, he wants to make a statement in this one. He also changed training camps and went to Sweden to train with the likes of Khamzat Chimaev and Alexander Gustafsson among others.

Oezdemir believes that has helped him a ton, especially with his ground game and he’s confident he will eventually finish Craig on Saturday.

“It’s definitely going to be a fight where the guy that brings his game is going to win,” Oezdemir said. “It’s MMA, it is all about making the right decision, so I could be overzealous in the striking and get caught. It’s a high-level game, so you need to watch for anything. But, there is more than one way I will be able to finish the fight.”

Should Oezdemir get the stoppage win over Craig as he says, he hopes he can face the winner of Jamahal Hill vs. Thiago Santos next time out.

“The Hill fight is interesting for me as I wanted to fight him, Santos is also a big name. The division is changing a lot,” Oezdemir concluded.

Do you think Volkan Oezdemir will finish Paul Craig at UFC London?