Tyron Woodley’s mother Deborah was not in the mood for fielding questions after her son was brutally knocked out by Jake Paul.

Woodley (0-2) and Paul (5-0) squared off for a second time last night in Tampa, Florida. The pair had originally collided in a high-profile boxing match earlier this summer in Cleveland, with Jake emerging victorious by way of split decision.

Tyron Woodley was attempting to overcome a five-fight losing skid when he returned to the ring yesterday evening. ‘T-Wood’ had ended his mixed martial arts career suffering four straight defeats inside of the Octagon. 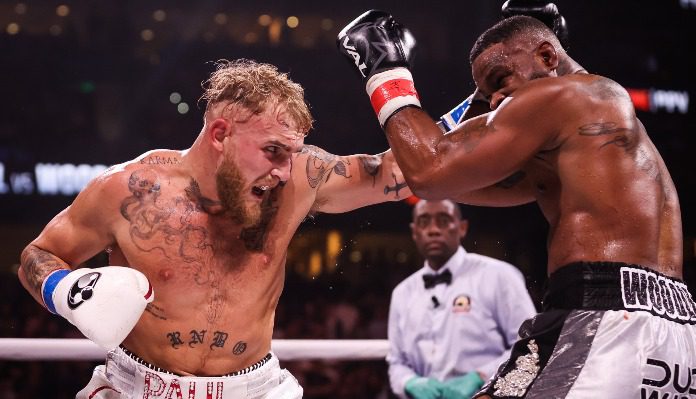 As for Jake Paul, ‘The Problem Child’ was looking to improve his record to a perfect 5-0 yesterday evening. Prior to defeating Woodley back in August, Paul was coming off a first round knockout victory over former MMA champion Ben Askren (see that here).

Saturday’s ‘Paul vs. Woodley’ rematch did not end in the fashion most MMA fans were hoping for. While Tyron Woodley got off to a better start in his second fight with Jake Paul, his decision to drop his left hand in round six proved costly. ‘The Problem Child’ cracked ‘The Chosen One’ with a big overhand right that sent the former UFC champion crashing to the canvas in a state of unconsciousness (see that here).

It was a embarrassing loss for ‘T-Wood’ and after the fight Mama Woodley was not in the spirit to field any questions.

“What did you say?” – Mama Woodley responded.

“What went wrong for him tonight?” – The reporter asked again.

“What the f*ck do you think mother f*cker?! What went wrong with you?” – Deborah yelled back.