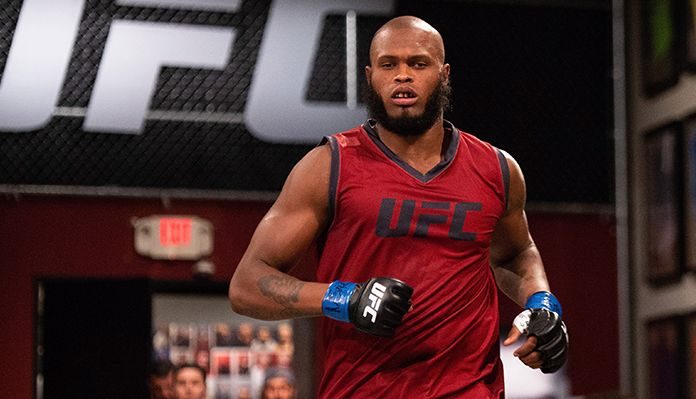 Maurice Greene has his sights set on the top-10 of the ever evolving UFC heavyweight division and will look to take a pivotal step forward this weekend.

“The Crochet Boss” will take on Sergey Pavlovich this Saturday at UFC on ESPN+ 20. The event will take place at the Singapore Indoor Stadium in Kallang, Singapore and will be headlined by a welterweight matchup between Ben Askren and Demian Maia.

After coming off of season 28 of The Ultimate Fighter, Greene has won all three of his fights as a member of the UFC roster. Most recently, the 33-year-old Greene finished Junior Albini at UFC Minneapolis in the first round via TKO — a victory that shot him into the UFC heavyweight rankings for the first time.

Now that he has that elusive number next to his name, Greene feels he needs to prove he belongs among the best the division has to offer.

“I strung together three wins but it wasn’t one of those wins where, right after, I felt like I’d get ranked,” Greene told BJPENN.com. “It makes sense to rank me since I have one of the longest winning streaks in the heavyweight division. I gave [Junior Albini] a little bit of everything, but in my head I want them to know why I’m ranked. I want the whole heavyweight division to know why I’m ranked, that they didn’t just put me there for no reason. I’ve got to show why they put me there. That’s just how I feel. I’m gonna do that every time I fight. Every time I move up the rankings, I’m gonna show them: ‘Now you know why I’m no. 5, now you know why I’m the number-one contender.’

The Factory X trained Greene is certainly happy being ranked in the top-15, but as great as that feat is, he is simply not satisfied with it. With an evolved game and an all-in approach to the sport, Greene has made the sacrifices and has built the confidence to continue climbing the ladder.

While many fighters look at the rankings as just a number, there are others who look at them from a business perspective; as a road map to the next destination. One of those fighters from the latter category is Greene himself.

“It kind of helps me see who I want to fight and who I want to call out,” Greene explained. “I’m not gonna call out someone who’s not ranked. That’s just stupid. Why would you take steps back when we’re trying to step forward? It gives me an idea of what competition I’m calling out. I’m always going to call somebody out after I fight. If I can weasel my path to the title, I will. But if the UFC makes those decisions, but I’m not going to not put my name in the hat to fight who I want to fight.”

The support of Greene’s fiancé, family, friends, coaches and teammates have been a huge influence on the rising heavyweight contender. As a full-time fighter, Greene is working for more than just the thrill of victory. He fights to support his family. He fights for money. Now that he has to travel across the world to face another contender, there is more on the line this time around.

“It’s tough when you travel as far as your bank account is concerned because there’s a lot of things you cover on the back end to get there,” Greene said. “It’s really important to go out there and out on a f**king show, let Dana White, Mick Maynard and Sean Shelby — the guys who are important — know that ‘The Crochet Boss’ is here. I’ve arrived. It’s time to give me those high-level fights. I’m trying to build a retirement plan. I burned the boats, like my coach said. The boats are f**king burned. I have to go through everybody to get to the top of that mountain, get my face f**ked up to do it.”

Maurice Greene will face Moscow, Russia’s Pavlovich who made his UFC debut last November at UFC Fight Night 141 when he was finished in the first round by Alistair Overeem. After suffering his first career loss, Pavlovich would rebound with an opening round finish of his own at April’s UFC St. Petersburg event over Marcelo Golm.

Pavlovich has an impressive record, but Greene isn’t overly impressed with his upcoming opponent and fellow top-15 heavyweight.

“Me? I’m a sniper! So you better hope that you hit me before I start sniping your ass. If I sit here, watch his videos and structure a game plan around him, I’m only playing his game. He’s gonna play my game. There’s nothing that he does that concerns me. I’m aware, but I’m also on point. I’m ready to fight. I’m ready to go out there and beat him. I’m the motherf**ker to do that.”

As most fighters will say, the biggest fight of your career is the next fight. That’s the mentality Maurice Greene has when it comes to his career. Getting the win is important from a financial standpoint, but for a humble Greene to move up the rankings as he visualizes, he admittedly feels that just getting his hand raised on Saturday is not enough.

“It’s not just getting the win, it’s being impressive,” Greene said. “Being impressive could be me piecing him apart for three rounds. It could be me knocking him the f**k out, or me submitting him. Whatever me looking impressive is, that’s what it is. I haven’t picked up a bonus yet in the UFC and I felt like in two of my three fights, I could’ve. Hopefully the third time is the charm because I’m doing this to change my family’s lives.

“I grew up broke — not super broke, but broke. We grew up with less than the average bear so I want to show my kids that dreams do come true with hard work.”

A win over Pavlovich will certainly stamp the proverbial passport of the UFC heavyweight division for Greene. His growth since TUF 28 has been quite obvious for Greene and those who have watched him compete. Now that he has entered the rankings and eyeing his fourth straight win inside the Octagon, Greene believes that UFC gold is within his grasp within the next year or two.

After watching Stipe Miocic knock out Daniel Cormier in the main event of UFC 241, Greene has begun to feel that not only can ascend up the heavyweight division, but he can compete with the very best in the world.

“I’m right were I need to be at this stage of the game,” Greene stated. “We’re ready to go in there and take the UFC heavyweight division by storm, and I literally mean by storm the way Israel [Adesanya] did. I’m trying to do the same thing. I said I wanted a title fight by the end of 2020, early 2021. I’m gonna work my ass off to get that fight.

“I feel like I’m right in the mix and I feel like every other heavyweight, even though they won’t say my name, they know I’m on their ass. Like Moneybagg Yo says, ‘I’m on they ass like some Huggies’, that means I’m close, I’m real close. Especially after watching that Stipe and ‘DC’ fight, I felt that confidence like, ‘God d**n, I can compete with these guys, now.’ It’s not a dream anymore. This s**t is my reality. If you let that name of who you’re fighting deter… ‘Oh my god, I’m fighting Mark Hunt, I’m fighting Alistair Overeem’, it’s gonna f**k you up. Like Coach Marc [Montoya] says, the name don’t mean nothing once you close that door. At the end of the day this a is a fight.

“It don’t matter what it looks like on paper, it matters who shows up that night to fight,” Greene continued. “I’m gonna show up that night to fight. I’ll be more than healthy and in great spirits and it’s all respect and all love, but I want to hurt you. He wants to hurt me, too. The feeling is mutual.”

Catch Maurice Greene back in action at UFC Singapore this weekend.