Tony Ferguson had a unique request in order to accept his fight against Nate Diaz at UFC 279.

Ferguson was supposed to face Li Jingliang in the co-main event in his return to welterweight. However, after Khamzat Chimaev missed weight badly the fights were changed and the promotion offered Ferguson to fight Diaz which he didn’t know if he was going to accept.

As he was pondering taking the fight, Tony Ferguson saw a Bentley in the parking lot which belonged to UFC executive Hunter Campbell. Ferguson wanted to take the car for a ride which Campbell obliged.

“You take the car for as long as you want. I don’t give a s**t about the car,” Campbell told Ferguson, according to a recent ESPN feature.

After just short of an hour car drive, Ferguson drove the Bentley back to the UFC headquarters and he agreed to move into the main event. 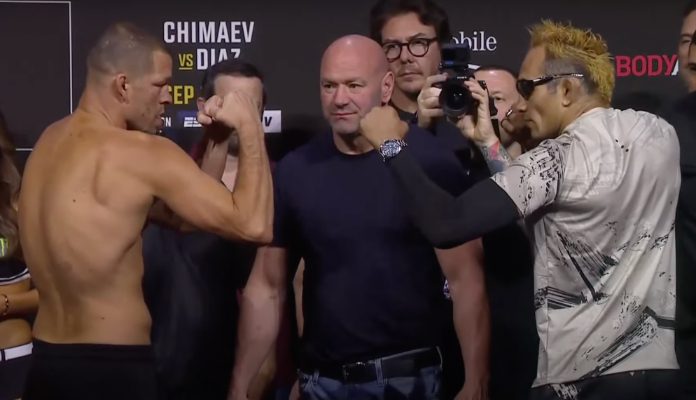 In the end, Tony Ferguson suffered a fourth-round submission loss to Nate Diaz which marked his fifth loss in a row. It was a close fight throughout it and for ‘El Cucuy’ he admits he was mad at himself for shooting for the takedown.

“I should have kept it standing. Period. Got to discuss somethings with my cornermen. Nothing bad. Nobody’s getting fired, nobody’s doing f*****g bad. It’s just some adjustments, it’s a new game for me, mixing it up, putting the MMA together. My [originally scheduled opponent], Li [Jingliang], was a right-hander,” Ferguson said after UFC 279. “If I would have went for the takedown [against Li] it would have been more difficult for him to do that kind of stuff, but Nate, he prepared for Khamzat [Chimaev]. You saw Khamzat when he took down Kevin Holland. He went, took him out on the right side, it was a right-handed opponent, it was on his lead jab. He went straight, put him down.

“I guarantee you Nate was looking for that guillotine the whole entire camp. They had a full camp to be able to do stuff. It is what you practice,” Ferguson continued. “We did a lot of wrestling practice and we did a lot of good stuff. It was just unfortunate, s**t happens. I wish it would have made it to the fifth round. I know what to do better next time. It f*****g sucks.”

What do you make of Tony Ferguson needing to drive the Bentley to take the Nate Diaz fight?

This article appeared first on BJPENN.COM
- Advertisement -
This article appeared first on BJPENN.COM
Previous articleGillian Robertson confident she’ll finish Mariya Agapova at UFC Vegas 60 after training with her for months: “We got a lot of rounds in so we are very familiar with one another”
Next articleDarren Till expects Khamzat Chimaev to move up to middleweight but confident he “can make welterweight comfortably”