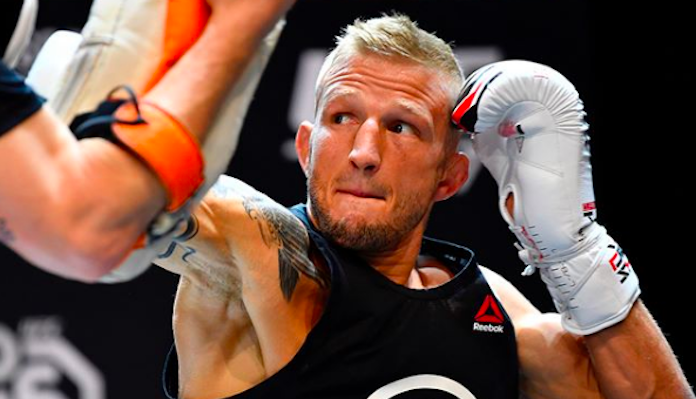 TJ Dillashaw believes Aljamain Sterling is more of an athlete than a fighter.

Dillashaw is set to face the bantamweight champion in the co-main event of UFC 280 in an intriguing matchup. ‘Killashaw’ is looking to reclaim his bantamweight title as he was forced to vacate the belt after he failed a USADA test.

Although Sterling has won two straight fights over Petr Yan – and has also beaten the likes of Cory Sandhagen and Pedro Munhoz – during his run, Dillashaw doesn’t think highly of the champ.

“(Aljamain Sterling is) not like a dangerous fighter. He’s not someone you have to go out there and be worried about getting finished or put to sleep. I’ve always known he’s great and he’s got some great skills at what he does. But to me, if I look at him, he’s not a fighter, he’s more of an athlete,” Dillashaw said on The MMA Hour.

This is also not the first time TJ Dillashaw has made comments like this about Aljamain Sterling as before the fight was made official, he said he didn’t think Sterling was dangerous or threatening.

“He’s definitely got his strengths, he’s got his annoyance with fighting, he’s awkward and what not, right, but he’s just not very threatening. I could f*****g go in there and fight him with my hands down and not worry about getting knocked out because he doesn’t pack a punch whatsoever,” Dillashaw said to Submission Radio back in May. “So it’s not a very nerve-wracking fight to go into. Think about the worst things that can happen is, you know, and Sterling’s not that guy so this is dealing with what he does good, to be honest, you know, he’s a world champion, you can’t take that away from him. Maybe the first time he got it was a little bit of bullshit, especially with the way he acted but he won the second fight fair and square.”

TJ Dillashaw hasn’t fought since May of 2021 when he beat Cory Sandhagen by split decision.

What do you make of TJ Dillashaw’s comments?