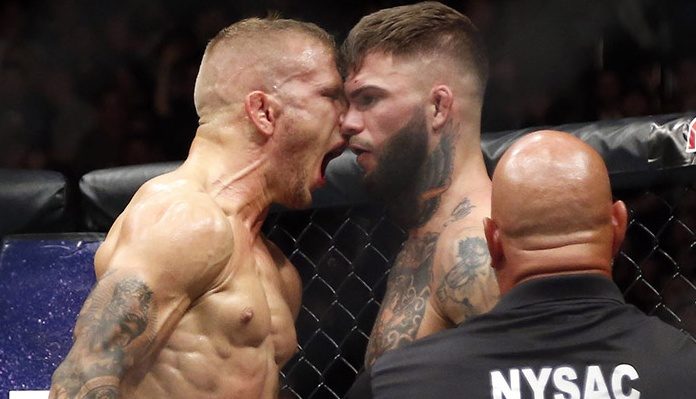 The two were bitter rivals just a few years ago. Previously training partners, they coached opposite one another on The Ultimate Fighter season 25. Following the season, they matched up at UFC 217 in November 2017. Their first outing ended in Dillashaw winning via second-round knockout.

The pair ran it back nearly a year later at UFC 227 in August 2018. Once again, the fight ended in a knockout for ‘Killashaw’. Since their two outings, Garbrandt has fallen on hard times.

‘No Love’ has only won one of his last four fights. He was last seen in a failed move down to flyweight last year against Kai-Kara France. Garbrandt lost the bout via brutal first-round knockout.

T.J. Dillashaw has now given his thoughts on Cody Garbrandt’s recent losses on The Schaub Show. The former UFC bantamweight champion paid respect to his former training partner. However, he also opined that Garbrandt lacks the intelligence inside the cage to remain a top fighter.

“He’s fast. He’s the fastest guy I’ve ever sparred or fought, by far the most speed, but I’m not trying to be a complete a*shole, but he’s not the smartest human being inside that cage. To be able to stay on the top, you’ve got to change who you are and fight to fight to fight, he’s the exact same fighter. He’s a wrestler. He knows how to wrestle. Why not learn some jiu-jitsu and stop relying on your chin and hands because your chin is not there.” (h/t MMAJunkie)

T.J. Dillashaw continued, “So change up who you are as a fighter, and he’s just not willing to do that. He’s gonna keep his head in the same spot, his hands are gonna be low, and he’s gonna throw hard, fast hooks. So after everyone sees where his weaknesses are at, and his left hand is in his pocket as he throws the right hand, just keep your left hand high and smoke him with the right. I mean, game over. We’ve seen it like five fights in a row.”

What do you think about T.J. Dillashaw’s comments about Cody Garbrandt?