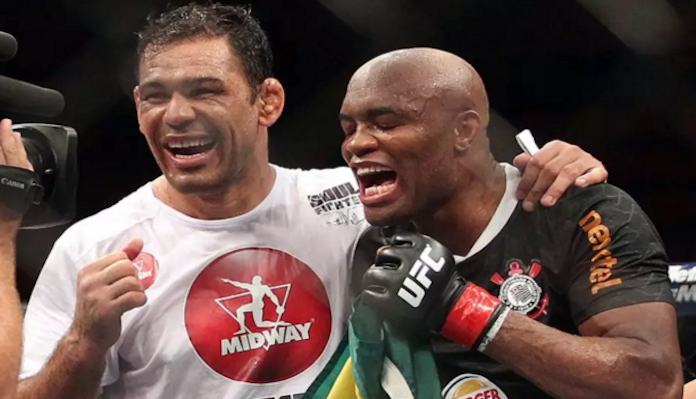 UFC heavyweight legend Minotauro Nogueira praised his friend Anderson Silva, comparing what he did in MMA to Michael Jordan in basketball.

Antonio Rodrigo Nogueira, better known as “Big Nog” or Minotauro, was one of the greatest heavyweights of all time and a legend in PRIDE and in the UFC. One of his best friends in the sport is Silva, who announced this past weekend following his TKO loss to Uriah Hall that he had fought his final UFC bout. Nogueira himself retired in 2015 at age 39. Like Silva, Nogueira was pushed to retire by UFC president Dana White following a losing skid.

Speaking to AG Fight following the final fight by his long-time friend Silva, Nogueira praised “The Spider,” comparing what he did in MMA to what the great Jordan did in the NBA.

“In the sports legacy, I think he is Pelé. I think we can compare well what Pelé did in football and what Anderson did for our sport. Anderson is what Michael Jordan was in basketball, what Guga was in tennis. He had this importance for MMA, not only national, (but) worldwide, for the sport. Because the UFC, when it had that visibility (in Brazil) in 2007 or 2008 until 2013, it was eight years of legacy, with different strokes, knockouts, a whole story that was told in his life. The guy is an icon, that way of him. His celebration is different, even his little dance is different, his stare made history, so, in all senses, I think he will become an icon of the sport,” Nogueira said.

There’s no denying what Silva did for MMA was special. Regarded as one of the greatest fighters of all time, Silva once fought Travis Lutter, who former UFC announcer Mike Goldberg famously said was “the Michael Jordan of Brazilian Jiu-Jitsu.” Regardless of what comparison you make for Silva when compared to other sports stars, there is no doubt he is an icon of MMA just as Nogueira said. In fact, both men are very much icons of the sport.

Do you agree with the comparisons that Minotauro Nogueira made about Anderson Silva?