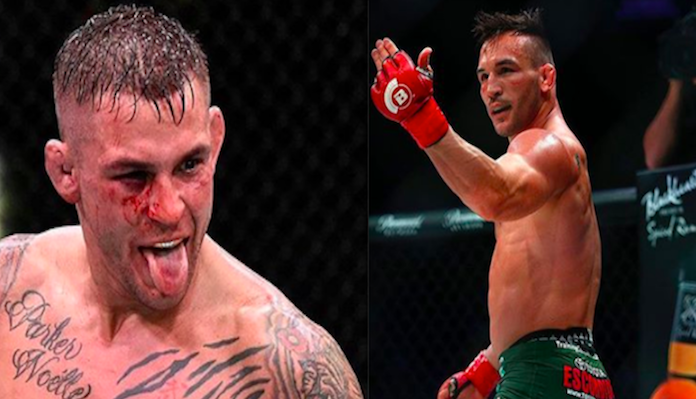 Michael Chandler (23-7 MMA) last fought in May of this year at UFC 274 where he proved victorious via a second round knockout of his lightweight opponent, Tony Ferguson (25-7 MMA).

As for Poirier, (28-7 MMA), he has not entered the Octagon since suffering a third round submission loss to Charles Oliveira (33-8 MMA) at December’s UFC 269 event. Prior to that loss ‘The Diamond’ was on a three-fight winning streak against Conor McGregor (22-6 MMA)-twice-, and Dan Hooker (21-12 MMA).

Chandler and Poirier had a heated confrontation when they crossed paths at the T-Mobile Arena in Paradise, Nevada for UFC 276 this past weekend. Gilbert Burns Durinho posted a video to ‘Twitter’ of the exchange between the two lightweight fighters.

Simple truth in life – you aren’t yourself when you’re that thirsty. Keep your cool, be a professional, especially in public. Your insecurities are showing. 💎

“Simple truth in life – you aren’t yourself when you’re that thirsty. Keep your cool, be a professional, especially in public. Your insecurities are showing.”

This is not the first time Chandler and Poirier have had words. It was during a recent appearance on ‘The Fight with Teddy Atlas’, that Poirier criticized Michael Chandler saying:

These comments did not go unnoticed by Chandler, who took to ‘Instagram’ in response:

Perhaps Chandler and Poirier will have to settle their ongoing criticisms of each other in the Octagon.

Would you like to see a Chandler vs Poirier match-up next?