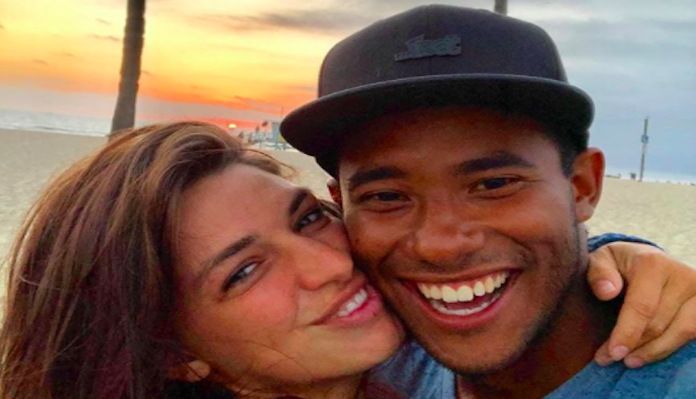 UFC women’s strawweight standout Mackenzie Dern says that she left Black House after her husband got into a fight with her coach.

Dern is one of the top-15 women’s strawweights on the UFC roster and this Saturday at UFC Vegas 11 she faces off against veteran Randa Markos. For Dern, she’ll be looking to get another win in 2020 after submitting Hannah Cifers with a kneebar in her last outing. She will be doing so with a new camp after recently departing from Team Black House as she is now learning the striking game under the tutelage of Jason Parillo.

Speaking to MMAFighting.com recently, Dern explained what led to the change of training camps. According to Dern, the reason she left Black House was that her husband, surfer Wesley Santos, got into a fight with her coach Juan Gomez. Dern says that Gomez was the one who provoked the fight and it’s the reason she left the camp.

“My ex-coach Juan Gomez, I don’t know what happened that he called us to go to the academy to talk. I think he was unhappy with a bonus, like money-wise for my last fight. Basically, I always ask my coaches, ‘Hey, during camp, if you have anything, just talk to my husband.’ Obviously, at home me and him talk about everything, so we’re the same person, but when I’m in camp I don’t want to have to think about it. I don’t want to think about money or coaches or anything like that, let’s just talk about training,” Dern said.

“So my husband talked to him. My husband’s like this surfer guy, you know, totally good vibes, afro, definitely not the fighter style. He went to go talk to him and [Gomez] was just like, ‘No, if you want to come to the academy, come to the academy and we’ll talk,’ and hung up. We went to the academy and he just swept dirt onto my husband, pushed him, and my husband pushed him back and they just went into a fistfight. It wasn’t like a brawl, a crazy brawl, it was like a street fight or technical fistfight. Back and forth, my husband’s doing feints, and I’m like, ‘Where’s he learning all this?’ It was so crazy.”

For Dern, something like this is obviously an unnecessary distraction as she looks to make a run for the top-10 at 115lbs. Though the sportsbooks favor her by a decent margin, she has her work cut out with her this weekend as she faces off with a tough, scrappy vet in Markos. It will be interesting to see if we see improvements to her game after the camp change. Perhaps this incident will end up being for the best.

Do you think the camp change will be good for Mackenzie Dern?