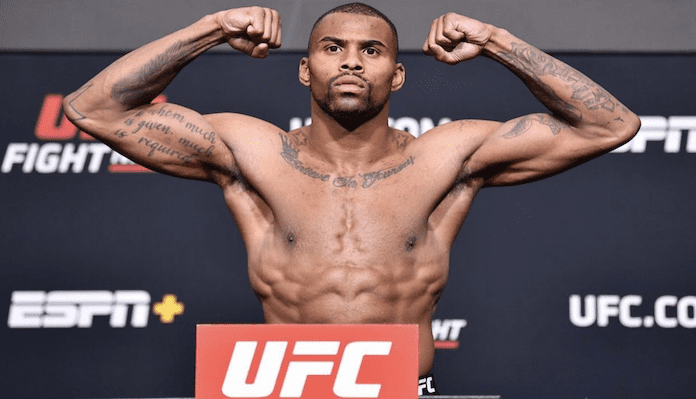 Williams improved to 4-1 overall in the UFC with the third-round knockout over Baeza. After finishing Alex Morono and Abdul Razak Alhassan in his first two UFC fights, Williams dropped a decision to Michel Pereira before bouncing back with a decision win over Matthew Semelsberger. Coming off of that big win, he came into this fight against Baeza with plenty of momentum and he got the job done with a brutal knockout in the third round. Following his win, which saw Williams earn a $50,000 “Performance of the Night” award, “The Oxfighter” took to his social media to react to what is one of the best wins of his career.

Khaos Williams: Your winner by KO in the 3rd round “TheOxfighter”. Testing chins & Changing my life one chin at A time Where I’m from respect is earned not given. I’m telling yall IM THE FUTURE WHAT YALL DONT SEE THE FACTS. I ain’t there yet but I thank god for the chance. My future looking brighter then ever & that’s a fact. Everything can change based on what you can do today. I spoke all this into existence, they didn’t feel me before but they know I’m a threat now. Thanks for the support everyone, We’re just getting started. ITS NOT PERSONAL….JUST PUNISHMENT #Dreamchaser #Oxfighter #God1st #RedDiamondRealEstate #AAARealEstate #hardwork #dedication #Outthemud #Hungry #Apexpredator #Greatness #Espn #UFC #ThePeoplesChamp

Following the event, UFC president Dana White hinted at the post-fight press conference that Williams could get someone in the top-15 at welterweight following this latest victory. Again, with a 4-1 record in the UFC with three knockout wins, Williams has proven himself to be quite the fighter and he has earned a step up in competition his next time out.

What do you think is next for Khaos Williams after he knocked out Miguel Baeza at UFC Vegas 42?