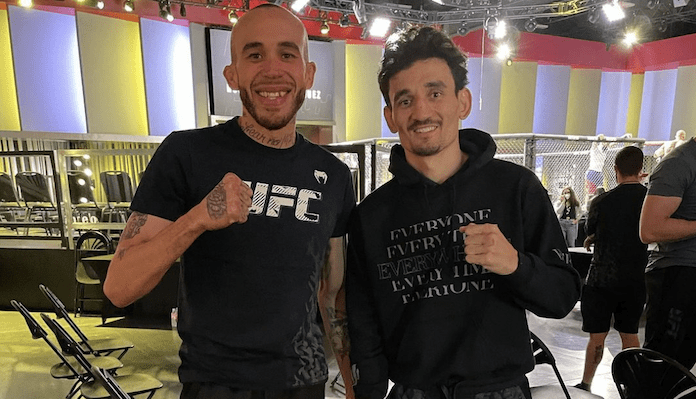 Woodson finished Collin Anglin in the first round via TKO with body shots in what was the best performance of his UFC career to date. As for Holloway, he defeated Yair Rodriguez by unanimous decision in an incredible performance in the main event. In both fights, each of the winners showed off their boxing skills. Woodson showed major improvements with his hands as he picked apart Anglin and then finished him with punches to the body, while we all know that Holloway is one of the best boxers in the business. As far as Woodson goes, though, not only are they both talented at boxing, they are the two best boxers in the UFC.

Taking to his social media following UFC Vegas 42, Woodson posted a photo with Holloway at the UFC Apex following their fights calling them both the best two boxers in the UFC.

The 2 Best Boxers in The UFC #Blessed #Believe

Woodson’s win over Anglin improved his overall record inside the Octagon to 3-0. He has defeated Anglin by knockout as well as winning decisions over Youssef Zalal and Kyle Bochniak. He also holds a knockout win over Terrance McKinney, a standout UFC lightweight fighter, from his stint on Dana White’s Contender Series two years ago. Woodson also has a submission loss in the UFC to Julian Erosa from last year in what was a big upset at the time. Following this big win over Anglin, expect him to get a step up.

What do you think is next for Sean Woodson following his big win at UFC Vegas 42, and do you agree with him that he and Max Holloway are the two best boxers on the UFC roster?